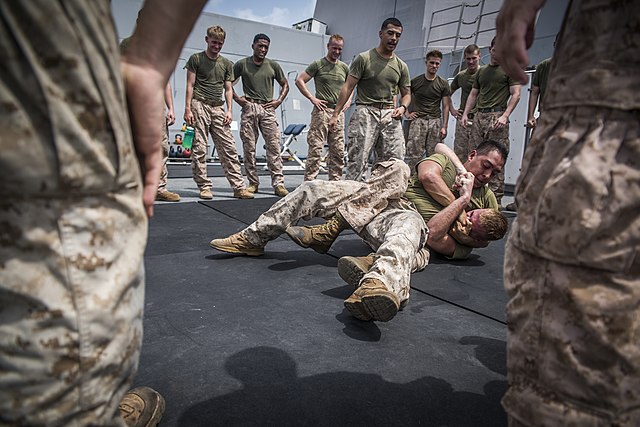 Martial arts simulate combat and stem from warfare. Here we delve deeper into the martial roots of martial arts.

Previous articles in our magazine have highlighted the connection between Greek warfare and Greek martial arts, primarily boxing and wrestling. Martial arts were meant to simulate and complement warfare, preparing warriors for unarmed struggle. The Greek historian Thucydides wrote in his History of the Peloponnesian War that fear, honour, and interest are the root causes of war, and in this, he took a more political view.

Nevertheless, in his studies of the wars between the Spartans and the Athenians, the historian came to see the role martial arts played in war: “The Lacedaemonians [Spartans] were the first to take off their clothes and, having stripped in the open, anoint themselves with oil during their exercises.” He goes on to say, “Even still today, those barbarians, especially in Asia, who have contests in boxing and wrestling, compete wearing diazomata [loincloths].” He recognised the role martial arts played in preparing for warfare and in developing skills and character.

Barbarians or not – and remember that for the Greeks the word had a highly technical meaning, referring to non-Greeks – boxing and wrestling were associated with war and conflict. The connection is found in Asia as well. The Samurai in Japan, once referring to mere peasants but over time morphing into some of the most skilled warriors in history, used martial arts to train. Their martial arts were known as jiu-jitsu, a history which we have chronicled earlier. One example of the remains of the Samurai legacy in Judo is that a Judoka remains mindful of how he kneels down; the left leg goes down first, for the sword would have hung down on the left hip.

The martial art or at least combat technique known as Krav Maga was developed precisely for war by the Israeli army. It takes moves from Judo, aikido, karate, boxing, and wrestling and deploys them in real-life situations which can arise in warfare. The aim here, however, is not to score points and subdue the opponent in a spirit of gamesmanship – the aim is the complete submission of an enemy.

Martial arts using weapons are more readily associated with warfare. Many of the Japanese arts, such as kenjutsu and kendo use swords, while bojutsu uses a staff. These tools come directly from ancient warfare and have made their way into modern sports, just as fencing has become an Olympic sport. Rules, customs, and protective wear ensure that the arts are firmly encompassed by the definition of sport, but the fundamental elements of warfare are still visible and put on display, reminding us of times when a touch in fencing could’ve been a lethal blow.

What can we say about the state of martial arts in modern warfare? With increased technological, cyber-oriented, mechanical, biological, and nuclear elements to war, there might seem to be little place for classic man-to-man combat in a melee situation. Martial arts still remain a vital part of combat training, however, as they serve to strengthen soldiers, prepare them to think tactically, accustom themselves to danger and stress, and learn how to defend themselves should they ever be in an unarmed situation. Unarmed conflict might be less common on the modern battlefield, but the lessons derived from martial arts are still useful. As the old story of Bruce Lee being asked by a student why he taught fighting while he proclaimed peace shows, ”It’s better to be a warrior in a garden than to be a gardener in a war.”