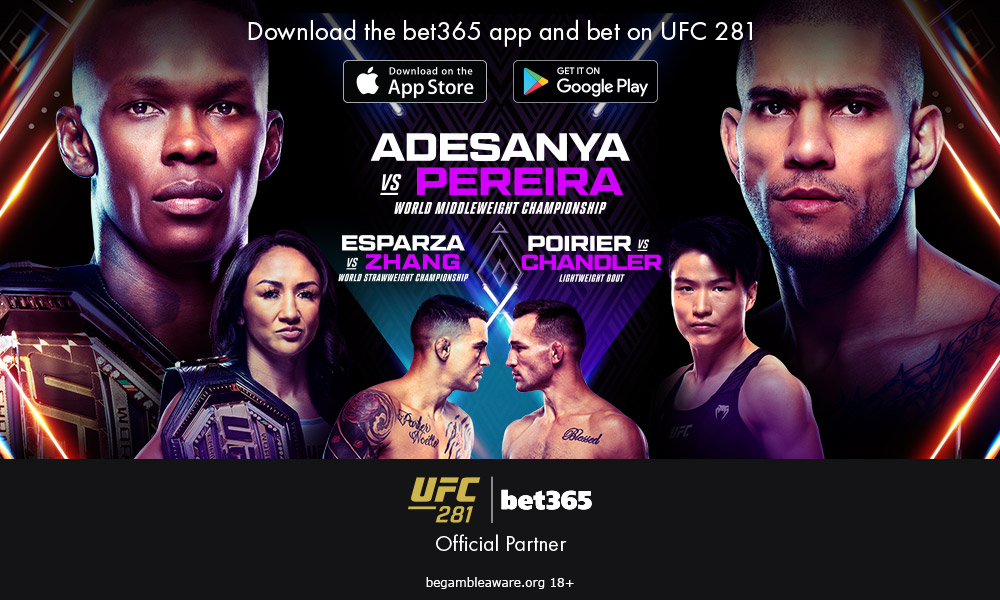 Tonight Israel Adesanya and Carla Esparza both put their belts on the line. Poirier faces Chandler in what looks like a potential slugfest, and Molly McCann returns to the Octagon. Here’s what you need to know.

Israel Adesanya, the UFC Middleweight Champion, has a rare knack for getting under people’s skin. Not only his opponent’s skin but also the fans. He can be irritating with his confidence and haughty pronouncements, which makes a lot of fight fans want to see him humbled. The only person who has ever truly humbled him is Alex Pereira. The pair have met twice before (2016 and 2017), both times in the Chinese kickboxing promotion “Glory of Heroes.” The first time Pereria won by decision, the second by a resounding knockout. This fight is highly anticipated as Adesanya is undefeated in his weigh-class. Adesanya is ahead in odds because although Pereira packs tremendous force and skill, Adesanya is as multifaceted an athlete as they come. I still think Pereira can take the W, but then again, it might just be the hope for the champ to be humbled speaking.

After Joanna Jędrzejczyk lost her rematch against Zhang Weili and Carla Esparza reclaimed her title from Rose Namajunas, it was clear that Carla and Zhang were set to meet. We have come full circle. Before UFC 275, I wrote:

Weili retained her title, which she has since lost in a bout against Rose Namajunes (who in turn lost it in an underwhelming performance against Carla Esparza, who was the first to hold the UFC strawweight title. She then lost it to Joana). A complicated history in many ways, which is set up for repetition. The winner of the forthcoming bout is said to face Esparza for the title.

It turns out that was true. Zhang is a dominant fighter with incredible strength despite her stature. In a recent video, she lifted Heavyweight champion Francis Ngannou off the ground. I think she has the tools to reclaim her title, which was first Carla’s when the division was created. It’s a tricky and circuitous story, but it’s worth following for those who have the requisite attention.

By far the most interesting fight on the card in my estimation is Poirier vs Chandler. The two Americans have been on a campaign against each other for months, without anyone – especially either of them – really knowing what it is about. Daniel Cormier sat them down to discuss and seemed that the two athletes were more enthralled by the idea of a beef than actually being engaged in one. Nevertheless, I think the two are very evenly matched, with Chandler being more of a dominant wrestler. As we have seen, Chandler has shown effective striking as in his defeat of Dan Hooker (who also fights on this weekend’s card, facing Claudio Puelles. Hooker takes it), but Poirier is also keen to stand. His last two fights against Conor McGregor proved that. I’m full of anticipation for this fight, and by the looks of it, we could be in for a show. Let’s hope they deliver. Poirier is favoured and I have received flack for calling Chandler overrated. Perhaps he proves us wrong – I’m going with the underdog by decision.

Other fights to watch will be Dominick Reyes, a one-time title contender fighting against Jon Jones in Light Heavyweight, who takes on Ryan Spann. Reyes looked good in his fight against Jones but has since then been on a path to regain some self-esteem. He has lost all his fights since (against two champions, I hasten to add: Procházka and Blachowicz). Maybe he can fight his way out of the prelims. Also on the prelims we find rapidly rising UFC star Molly McCann who raised the roof in London twice this year. She’s up against Erin Blanchfield who has a better record, longer reach, and odds on her side. McCann has been dominant on home field, but can she deliver in America? I think it will be difficult, but should she pull off another win by elbow KO my hat will well and truly be off for her. I think Blanchfield edges it by decision though.

The full card is available here.