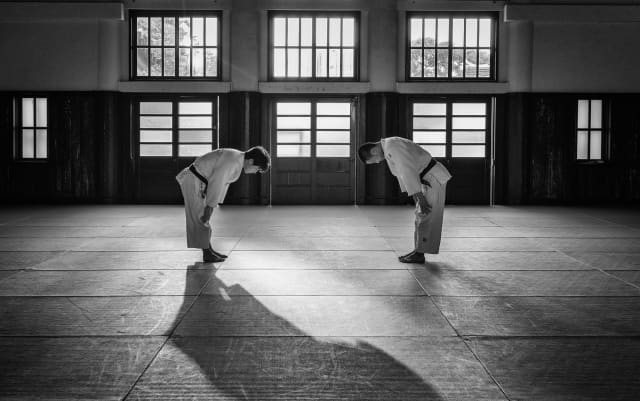 Martial arts are not about violence – they are about skills, virtue, and personal development. They stem from ethical codes attached to a martial craft because warriors know that when it comes to matters of life and death, ethics are key. Judo is a martial art that has developed a strong moral code.

Jigoro Kano, the man who founded Judo, established a moral code to go with his new martial art. His code wasn’t entirely novel, nor was his style of fighting. They both draw on a rich history but were tweaked by Kano. These are the core moral values he wished to instil in those who practised Judo – the “Gentle Way.”

The International Judo Federation rightly points out that courage is one of the central virtues that philosophers and writers have written about for millennia. Yet, there are a few unifying themes: the division between physical and moral courage. The IJF add:

Whatever definition one takes into account, to be courageous requires firmness, the strength of character, morality, energy, sometimes boldness, guts or strength. Talking about courage also implies that there is danger and that difficult circumstance must be faced.

In life, we are all confronted with fear at some point or another. Courage is the strength to face fear head-on and to keep going. But it also implies acting with deliberation and decisiveness. Continuous randori and practice in the Dojo help one instil a sense of courage.

Respecting others means showing due reverence to the dignity of fellow practitioners of Judo, but also deference to our superiors. This is why we call our coaches “Sensei” and not by their given names. Respect also implies respect for the place, which is why Dojos must be kept clean. It also applies to our hygiene out of respect for others. Judo is an individual sport but can be practised without at least one other person – the opponent. To this end, it is critical to retain respect as a “non-negotiable absolute.”

MODESTY – BEING WITHOUT EGO IN THOUGHT AND ACTIONS

This virtue is also sometimes known as humility. It means having a correct understanding of ourselves and not putting ourselves in front or above others. Surely we have all seen athletes reaching the heights of their respective sports and bragging about their achievements. It is important according to the Judo moral code to never forget one’s struggle to get there. Humility is the basis of greatness, says the IJF. All athletes, no matter how braggadocios in public know the efforts it took to get there and that many others are trying to get to the same position as them.

SINCERITY – WITH THOUGHTS AND ACTIONS

The IJF use two quotes from famous writers to convey what they mean by sincerity:

To be sincere is not to be in appearance as explained by the writer André Gide (1869-1951), “We cannot be sincere and appear at the same time”, while Jean-Baptiste Poquelin, known as Molière (1622-1673) maintained, “I want us to be sincere and that, as a man of honour, we never drop a word that does not come from the heart.”

Senseis try to instil courage in their students to speak without deceit. Sincerity also implies loyalty and duty. We cannot lie to ourselves in our actions, because our attitude on the tatami translates into how effective we are in a fight. If we lie to ourselves and others, we will soon be found out. Our words relate to our actions, and thus we must seek to be sincere in both word and action.

FRIENDSHIP – BEING A GOOD COMPANION

Friendship is an essential aspect of human life as philosophers since the days of Plato have noted. There are types of friendship and some friendships can be stronger than others. But the need for friendship is undeniable. The Dojo is a place where friendships can be forged, with a proper context to enable true friendships to emerge and last. Friendships, said Aristotle, must aim for virtue to be strong and lasting, and Judo is one phenomenal way to achieve this. By working together to achieve our goals in the Dojo, we can also create the foundations of a friendship that lasts outside of the walls of the Dojo.

HONOUR – DO WHAT IS RIGHT

In our sport, honour means not to belittle our opponent, but on the contrary to give him or her all the honours he/she deserves for having offered us respectful, formative and constructive opposition. In judo, there can be no honour without respect for others.

So writes the IJF. Honour implies doing the right thing at the right time. It means listening to and following rules, being just in one’s practice and being respectful of the opponent. Cheating can never be accepted, and due reverence is owed to the sport, the Dojo, the sensei, the referee, the opponent, and oneself.

POLITENESS – KINDNESS TO OTHERS

Social interaction relies on being civil. This is what Judo tries to convey through politeness. We greet each other, bow (rei) to our opponent and senseis, and make sure to say goodbye at the end of training. In martial arts, there is pain, a simulated struggle or fight, and therefore it is extra important to be kind to avert any potential disagreement or tension in the Dojo.

“Know thyself” is one of the Delphic maxims, inscribed in the forecourt of the Temple of Apollo at Delphi in Greece. It is important to have self-awareness to know which aspects of oneself one has to improve and to know what might be potential triggers. In battle, it is vital to keep calm in the sight face of danger.

Knowing one’s limits helps one prepare and confront difficulties. Regular training allows us to realise what our weaknesses are and perhaps what frustrates us. Honing this in the Dojo can help us to control ourselves outside of the context of training.

In short, Judo is more than a sport. It is a way of life, the “gentle way.” Most people will acknowledge these virtues and claim to adhere to them in some way or form. Judo is merely one, albeit very concrete, way of training these virtues.