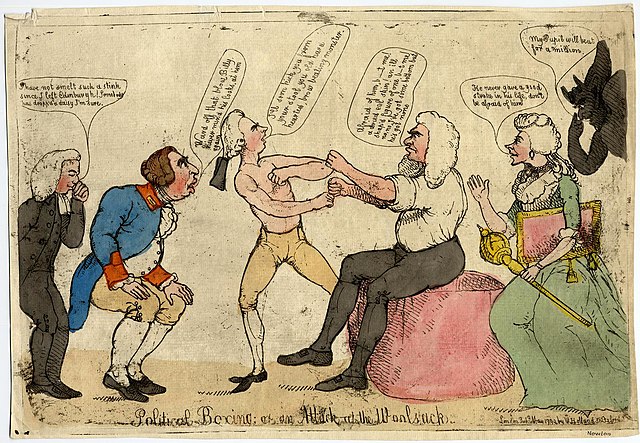 Politicians tend to use pugilist language to describe their endeavours. How has boxing been used by politicians to promote their own ideals? And what is the history of the connection between boxing and politics?

In the past few days, there seems to be a lot of politics on the news. Sweden has a new Government, as does Italy. The UK has its third Prime Minister in three months. The Americans are heading into their Midterms. This is not a political journal, but the political cycle holds an interest for our readers for another reason: pugilist language is in campaigning, and boxing-style posters are used by newsagents to frame the political struggle. Why is this?

In the past week, I have seen a cartoon with the ex-ex-British Prime Minister, Boris Johnson, as a boxing referee, overseeing the demise of one of his successors. The Spectator have a front cover this week showing President Joe Biden in boxing trunks and gloves. Yet, this type of cartooning is not new. Go back to the days of the old 18th-century cartoon magazine “Punch” in the UK (similar to the image accompanying this article above) and you see a trend crossing the generations of political punditry.

It seems like an apt metaphor. Two sides (or in some cases more, but typically “Left vs. Right”), battling it out. A momentous struggle for the hearts and minds of the citizens – or at least their vote. What better image to illustrate this struggle than the most concrete form of struggle: the physical fight between two combatants? Boxing, it turns out, is never far from human imagination. Many of those who illustrate politics with the help of boxing have likely never seen a fight, let alone stepped into the ring themselves, but the combat between two ideas cannot be better visualised than as a battle in the tradition of the old Queensbury rules.

The connection between boxing and politics goes back to the foundations of the sport. Or perhaps of politics. Their relationship is intimately intertwined, as the beating fists reigning down on a “political” opponent is found in the Greek city-states. The Olympic Games, at least to some degree, showcased the strength of warring Greek tribes, and boxing played a role. It was a relatively “peaceful” way of settling a conflict. Rather than going to war, the best pugilists could settle the score. History is rarely as neat as such an account would make out, but there is a grain of truth, as politics may be said to relate to battle, and boxing is a simulation of battle in its purest, most scaled-down fashion.

Boxing has also been used as a tool for political propaganda by politicians themselves. Filippo Marinetti, the founder of Futurism and an avid Fascist, used boxing and metaphors of “blood and violence” to promote his, and Italy’s, new-found ideals. Hitler also turned to pugilist metaphors as signs of strength and vitality, as he saw it. Based on this, it might sound as if boxing has been hijacked by extremist ideologues, but Martin Luther King Jr. also took to boxing to make his point heard. During a speech, he once mentioned that a southern state adopted a new method of capital punishment. Poison gas supplanted the gallows and a microphone was installed in the cell. The first victim – a black man – was heard saying ”Save me, Joe Louis Save me, Joe Louis.”

Boxing also takes on a political dimension at times. When Joe Louis faced Max Schmeling it was just before the Second World War. The drama in the ring echoed the global conflict in which the Allies and the Axis would soon be embroiled. The onlookers knew the meaning of such a momentous struggle as they saw unfold before their eyes. The first fight went to Schmeling and gave the Nazis a boost of confidence as they proclaimed the superiority of the German race. But when Louis took out Schmeling, seemingly without effort, in Madison Square Garden, the Americans thought the days of Nazi ideology were counted.

From time immemorial politics has been associated with boxing.