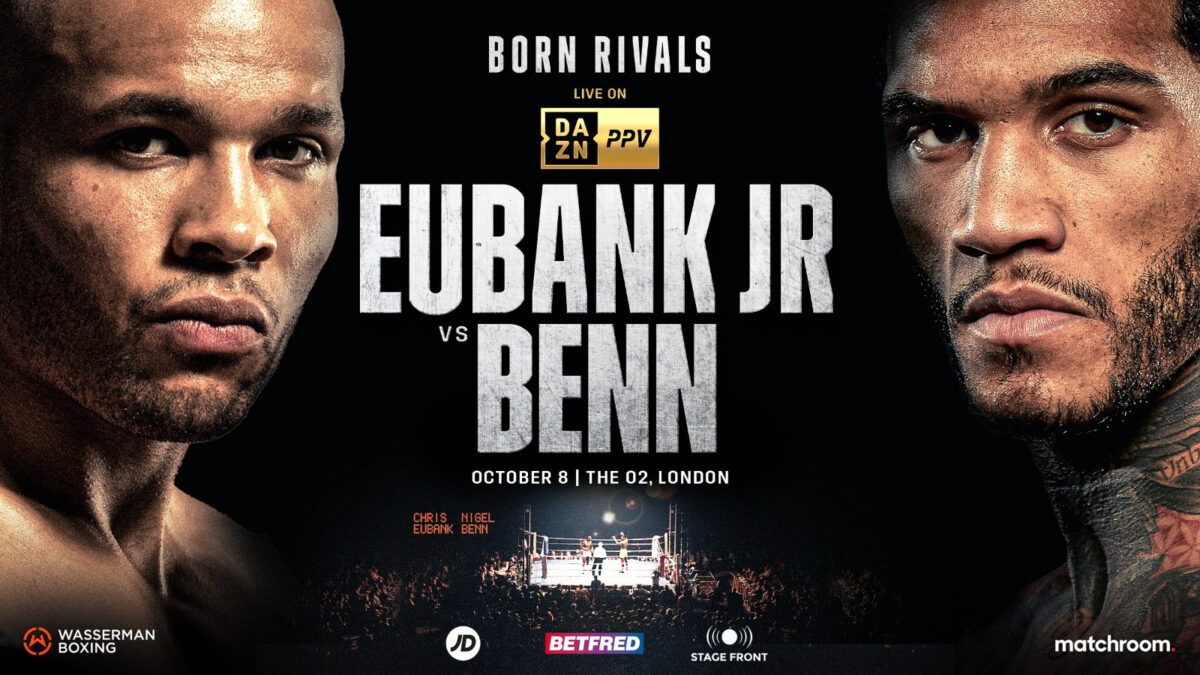 The legacy fight between Eubank Jr and Benn has been postponed on a weekend where there were few fights to begin with. Nevertheless, there are interesting questions to be raised about the postponed fight, and fortunately, fight fans had other action to entertain them.

Branded as the continuation of their father’s rivalry, Chris Eubank Jr and Conor Benn were set to square off on Saturday at The O2 in London. While I happened to be in London this past weekend, I’m glad I didn’t book a ticket. Last-minute cancelled fights seem to be on the menu of late: last month it was Shields vs Marshall. There is one major difference, however. Last month, the all-female card was postponed due to the death of Her Majesty, Queen Elisabeth II, while Saturday’s bout has been postponed indefinitely due to Conor Benn being caught on drugs. He tested positive for the banned substance clomifene. Perhaps ironically, it is a women’s fertility drug, but it simultaneously functions as a performance enhancer and increases testosterone if taken by men on a regular basis.

The fight had already been criticised by fans of the sport for playing into sensationalism rather than accurately reflecting the skill of professional boxers. The two fighters come from different weight classes. Eubank Jr is two weight-classes over Benn, but a catchweight bout was agreed at 157lbs. While cross-weight fights happen (think only of the recent Rankin vs Harper bout where Harper went up three(!) classes), this fight would not have happened had it not been for the history between their fathers. This makes it an interesting story (at best), but had it not been for boxing the story would lack a certain epic dimension. Borg vs McEnroe Jr, anyone? I am sure such events exist, but it’s no coincidence that Rocky – that masterful feat of pugilist culture – has been followed by Creed (the son of imaginary boxer Apollo Creed) vs Drago (heir of Ivan Drago played by Swedish actor Dolph Lundgren in the classic Rocky film).

The boxing element, then, is just one of the major questions raised. Where is boxing going, when it is not the best fights that are being put on, but the best-selling ones? Are they the best-selling fights? And are Eurbank Jr and Conor Benn even close to equalling the boxing acumen their parents had? Don’t get me wrong, I swallowed the pill and was keen on watching the fight – until I heard that Benn had literally swallowed another pill.

The Nevada Commission is extremely strict. USADA makes it very difficult to cheat and enter the UFC Octagon on anything other than water and rye bread. Strategic, random, and regular tests help ensure fighters stay clean leading up to, and during, bouts. Some fighters play with USADA, such as Paolo Costa’s boasting his “Secret Juice.” Nevertheless, many of us remember the days when many fighters were actively on steroids. Wasn’t it Nate Diaz who said “they’re all on drugs”? It’s likely that many are on at least something which grazes the grey area of legitimate supplements. The interesting thing here is why fighters feel compelled to use such drugs.

Fighting is often said to be raw, pure, honest, and primordial. The use of drugs puts all those virtues to question. It also puts the mentality, ability, and toughness of a fighter into question. Can he/she perform without supplements of this particular kind? There are different types of supplements surely, and not all have the same effect, but any performance enhancer questions the original cloth from which the athlete is cut, and in this case whether the fighters really are their father’s athletic heirs.

It also remains to be seen what happens with the commission. Rumour has it Eddie Hearn might want to sue with the long march approach to monopolising the sport and setting up his own commission. Or they look elsewhere for someone to sanction the fight. The business side remains an enormous part of the sport, but boxing isn’t darts and serious injury can be incurred without due care. The fight is likely to take place in the near future – there’s too much money in it – but where and when, and under whose supervision?

Friday night saw a BantamWight Championship bout between David Martinez (9-1) and Axel Osuna (5-2), where Martinez – the reigning champ – retained his title. In the court round, at 4:14 the bout was stopped with the victor being declared by TKO. Martinez chipped away at the legs of the challenger, leaving him damaged and bruised. The first two rounds saw an onslaught of rapid fists and kicks which put Martinez ahead from the start. Osuna tried to come back putting pressure on the champ and shooting for the takedown. The champ held his ground and survive the attacks. In the third round, Osuna dropped Martinez, but he couldn’t close the deal. Instead, Martinez came back and scooped Osuna’s legs, dropped him to the ground, and rained down shots before the referee stopped the fight.

Champion David Martinez defeated Axel Osuna by way of TKO at 4:14 in the fourth round.

Diana Sanchez defeated Damari Olivares by rear naked choke submission at 2:04 in the first round.

Yadir Del Valle defeated Miguel Lugo by TKO at 2:04 in the second round.