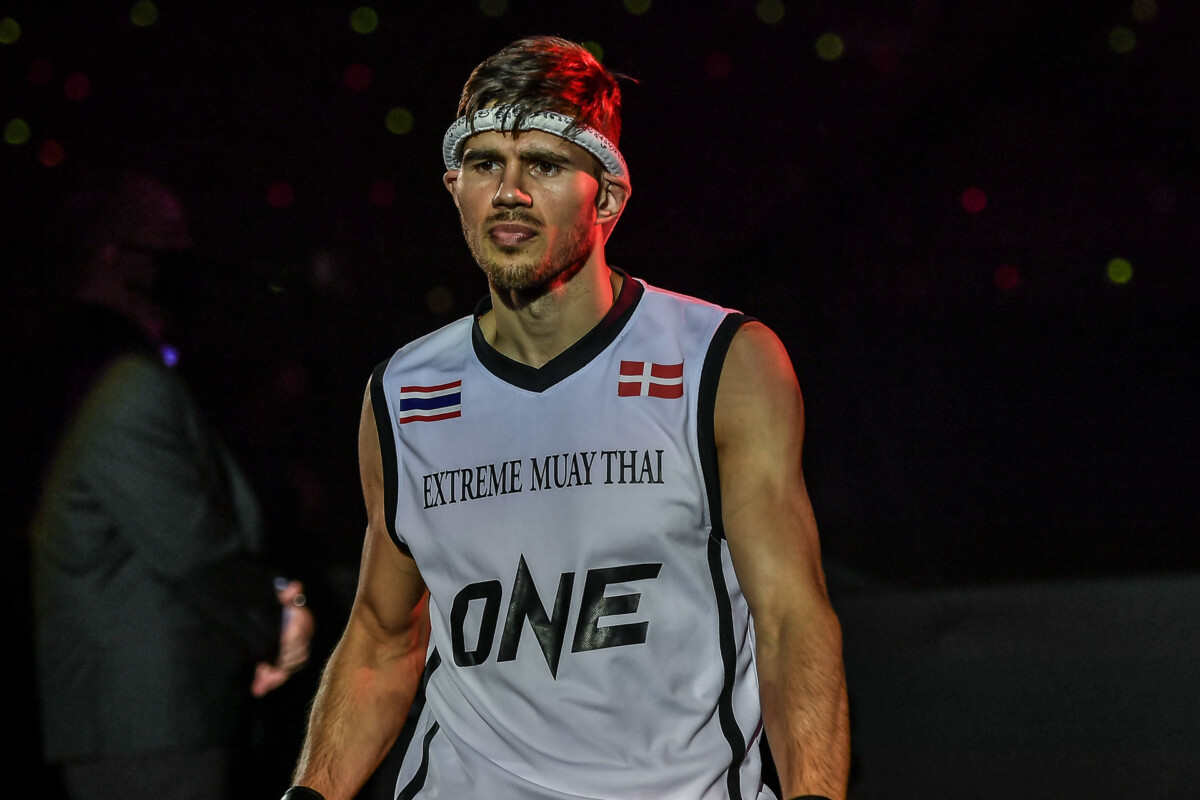 Following his loss to Tawanchai who has since gone to claim the ONE Muay Thai Featherweight title, Niclas Larsen returns to the ONE circle to face Jimmy Vienot on October 21st. We spoke to him about his forthcoming bout, the aesthetics of fighting, and the Scandinavian “Jante Law.”

Last time we spoke to Niclas “The Dreamchaser” Larsen he was preparing for his ONE debut at ONE 158 where he faced Tawanchai. Larsen lost that fight in a second-round KO. The victor then proceeded to face the reigning champion Petchmorakot, whom he swiftly dethroned with a unanimous decision win. I ask Larsen how he has been since his last fight and he seems just the same as before his previous bout. “Pretty good actually! I’m really good at enjoying life, doing things I like and enjoy. I love training, I love being with my family, I love all the things I am doing. I feel grateful for the life that I have.”

Larsen brings a positive attitude, but the defeat still stings. Speaking about the fight Larsen says “I had a strategy. It was a good strategy, but he was one step ahead of me all the time. I had to be better in my timing. I also had to be more present in the moment. I was stopping myself with my strategy because the timing I faced was just incredible! He was ahead of me the entire time. For some moments I got into him and I saw some frustration from him with the things I came with. It was a learning experience for me. Tawanchai is a great fighter and it helped me develop and adapt my training. If I spar with partners that are not of similar calibre as Tawanchai – which is very difficult to find – I am going to discover something different in the ring.”

How does an athlete recover from a loss? There is a mental component, adds Larsen. Even though he is an optimistic person, he admits there is always some element of trauma when it doesn’t go as expected. He had to regroup, change, and take it as a learning experience. It also serves as a motivating factor, sticking to his mindset that he sees every fight as an opportunity for development. “It makes me excited to create a potential I can bring into the fights.” When he doesn’t win in the ring, he looks for wins in his “internal environment” – i.e. mentally. Win or lose, as long as he does his best, he knows he will succeed and develop. “I can’t take no for an answer, so I keep on going. It’s all a part of the process.”

Larsen is focussing on both his strengths and weaknesses in the lead-up to his next fight. He admits that he has better sparring partners with slight hesitation out of respect to those who have helped him along the way, but thinks he needs to challenge himself with the hardest opponents he can find to improve. Now he faces Vienot, a fighter who made Petchmorakot look beatable, despite losing by decision. Larsen agrees, stating “Jimmy looked amazing against Petchmorakot. It was an awesome performance. He totally turned the champ. I was very unsure whether Petchmorakot would win. I believe this is what it is like with the best up there – it depends on styles, the mental part, and how to be in the moment. It all has a big importance in fighting. At the top, everybody can win. It depends on how we set ourselves up for the day and the right strategy at the right moment. This is why I love this sport. There are so many strategic aspects it depends on.”

THE BEAUTY OF FIGHTING

In our last interview, Larsen spoke of his fight with Tawanchai as “creating a Picasso.” I ask him to expand on this image and whether he thinks fighting can be beautiful. “Fighting can definitely be beautiful. What I mean by ‘painting my Picasso’ is that when we get into the zone or the flow, that’s where we find our creative self. That’s what I experience when I fight the guys who are the best in the world. It didn’t happen pastime, but I know if you push the right button it will go all by itself.”

Defeating Vienot, Tawanchai is on the horizon. But Larsen is not looking past Vienot and stresses how excited he is to fight him. Following a win, however, he does want the rematch and with the added enticement of a possible title, the fight is even more attractive. “I take one fight at a time, I’m focused on Jimmy. But now that Tawanchai has the title, my eyes are on the belt and I am pretty excited about the journey I can create now. I fought the champ in my debut and now I am meeting a pretty tough guy who also faced a champion. I am writing a story which is just getting more exciting. That’s something that really motivates me to keep on going. Jimmy has to be prepared for a Niclas who is better than ever.”

As a fellow Scandinavian, I ask what Larsen thinks about the law of Jante, which is a code of conduct telling Scandinavians that they shouldn’t presume themselves to be better than anyone else nor should they aspire to show this publicly in any way. I ask if this ever crosses his mind and if it can have a negative effect when being in the business of proving himself better than others. “Janteloven is just a program. It is in our culture, and when we notice that the Jante Law is talking to us, we have the possibility to change it. I love the developing journey I am on! Before there were so many impossibles that today are possible. That is to take the Jante Law and kick it in the butt. There is no Jante law that can rule my life. Of course, it tries to speak to me at times, but I am so lucky that I have the possibility to choose.”