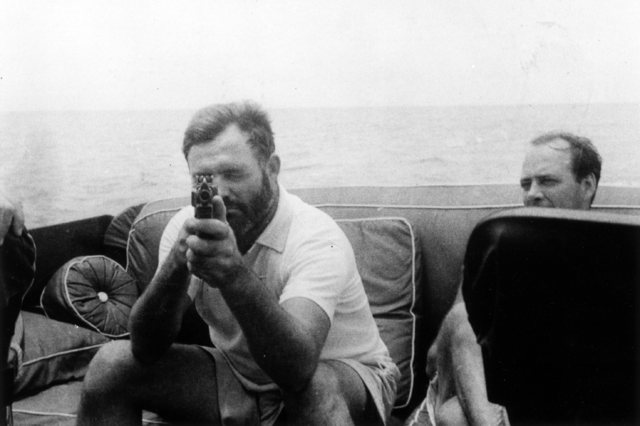 Some of the greatest minds throughout history have been fighters. Why did they chose to write about their experience in the ring, and what effect did it have on their thinking? Writing and fighting have seemingly always worked hand in glove.

The connection between writing and fighting is not as spurious as one might think. The Ancients, who bequeathed work of literary height writers still aspire to emulate, both wrote about fighting and engaged in combat sports. The most famous is Plato, sometimes called the father of Western philosophy, who wrestled in the Isthmian games. Plato – who was actually born ’Aristocles’ – derives his name from his broad shoulders. The name ‘Plato’ was given to him by his wrestling coach.

The philosophical connection to combat sport doesn’t end with Plato. The French philosopher Jean-Paul Sartre was an amateur boxer in his youth, writing ’every boxing match incarnates the whole of boxing as an incarnation of all fundamental violence.’ He dedicated around 30 pages to boxing in his Critique of Dialectical Reason. He used his love for the sweet science to argue broader points about societal conflict. One might say that his claim that every boxing match represents violence, is a comparison to how every minor conflict in society resembles the wider class struggle.

Leaving philosophers behind and turning to novelists we find a plethora of fighting authors. Naturally, there have been many who have written about fighting. Joyce Carrol Oates’s classic ‘On Boxing’ comes to mind. But this is about writers who fought. The most famous writer associated with boxing is perhaps Ernest Hemingway. Hemingway went so far as to say that ‘my writing is nothing, my boxing is everything.’ There is reason to believe he exaggerated this claim, but it proves how important he thought boxing was for him and his image. A macho intellectual, posing with his gloves and writing short sentences while omitting necessary adverbs. The fast paced narratives this style generates and the tough storylines about war and bullfighting are testimony to this created self-image.

Boxing is a work of art

Charles Bukowski was one of the writers in the ‘Beat Generation’ arising in America in the 1950’s, ten year before Hemingway’s death. He, too, was someone who wanted to identify himself with boxing. In one short story called ‘The Boxer’ the protagonist says ’I feel so good. Boxing is a work of art, it really is. It takes guts to be a great artist and it takes guts to be a great fighter.’ This was a true sentiment held by Bukowski; he once said ’bullfighting can be an art, boxing can be an art.’ On his grave one can see the figure of a boxer. Clearly boxing had an impact on his mindset, but when asked how he goes about his craft as a writer and how he creates, he replied: ‘don’t try.’ This might explain why he never had a boxing career.

when you live most of your life in the mind, it is good to be knocked back into reality every once in a while.

Few books about boxing have gained a cult status, but one that could claim such a title is Norman Mailer’s ‘The Fight,’ tracing the story of Muhammad Ali and George Foreman’s 1974 ‘Rumble in the Jungle.’ The book is about more than boxing; it is a study of the politics of an era, seen through the lens of one particular boxing match. Sartre’s theory mentioned above springs to mind. But Mailer did some sparring himself. He followed fighters into the gym, and was not shy of entering the ring. A similar writer from another culture is Vladimir Nabokov, who both wrote about fights which he attended, and who made a living by providing boxing lessons.

WHY DO WRITERS FIGHT?

The question that arises is why these writers turned to boxing? What is it about boxing and wrestling that has captivated the mind of some of the greatest thinkers and writers throughout history? One answer is that it provides an easy marker of masculinity. Yet surely there is more to the story than an archetype of macho-culture. Fighting digs deeper into the human spirit, reminding us of the risks that surround us and the struggles we face. It brings to light the sense of community that exists between sparring partners and members of a gym, while not forgetting the ultimate loneliness which is our predicament. Nor should it be underestimated or forgotten that when you live most of your life in the mind, it is good to be knocked back into reality every once in a while.