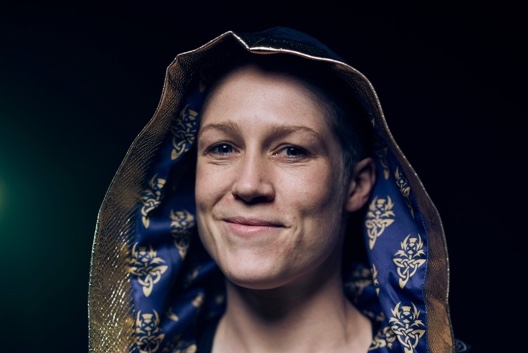 On September 24th, WBA and IBO 154lb World Champion, Hannah Rankin, steps back into the ring. She faces challenger Terri Harper in Nottingham, putting her belts on the line. We spoke to Hannah ahead of her bout on Saturday, speaking about her accomplished career, future ambitions, and musical achievements.

The Scottish World Champion has not always been a boxer. She started boxing only in her 20s making her boxing feats all the more impressive. She began her martial arts career through Taekwondo with her sister, training for many years, but eventually moved away from it to focus on her musical career. Only after finishing her undergraduate degree and before beginning her master’s in London, did Hannah get back into the gym and Thai boxing, mainly for fitness. She then started boxing and fell in love with it. Fast forward to 2018 and she won her first World Title, only a year after making her professional debut.

Career changes happen in life, but taking on an arduous career such as boxing can be thought of as impossible and reserved for those who have boxed since childhood. Exceptions exist, such as Deontay Wilder. And Hannah Rankin. Her achievement is magnified by the fact that she not only managed to climb to the top in a relatively new career but combines it with another accomplished career: as a musician.

Her degrees are in music from the Royal Conservatoire in Scotland and the Royal Academy of Music in London, where she honed her skills as a bassoonist. She still performs and teaches music. The combination might strike some as jarring, but the connection between martial arts and music goes back to the foundation of civilisation itself.

Most people think I’m crazy and that there is nothing in common, but actually you have to have good rhythm to perform music, and also to do boxing.

In Plato’s Republic, we find reflections on the nature of man. To excel in life writes Plato, we need to train both the body and the soul. The body is trained through gymnastiké – which for the Greeks primarily implied boxing and wrestling. But this bodily training is only secondary to musiké: training of the soul through music and poetry. The well-rounded individual must master both aspects of life to be a consummate human being. I ask Hannah how she sees the relationship between her two professions.

“Most people think I’m crazy and that there is nothing in common, but actually you have to have a good rhythm to perform music, and also to do boxing. It is very helpful in the ring. Also, when you are on stage and in the ring, it’s the same sort of feeling of performance: the adrenaline, the lights go down – all eyes are on you. It’s your chance to really showcase what you can do. In music, when you sit down, you get the adrenaline and fight or flight feeling – but you can’t go anywhere. You have to look well-behaved, while in boxing you can put the sense of flight into practice. In boxing, I get to move around and let that energy move around with me. They both require a huge amount of discipline and practice. I’ve been very lucky to come to boxing through music, where I learned to practice for hours and hours a day. Often, my coach would have to kick me out of the gym because I just wanted to practice things! The last thing that connects the two is that music allows me to be creative. When I’m in the ring, I can get the creative juices flowing. Martial arts is like a dance, so it’s a very natural cross-over.”

The juxtaposition of music and boxing might still leave us with an unresolved question. Music seems gentle, while boxing is associated with violence and fighting. Why, I ask, does Hannah think we are attracted to fights? “It’s the ultimate competition with yourself. It’s one-on-one gladiatorial combat, and we don’t have many of those situations in real life these days. If you go back in history, fighting with one other person is always about you or them. Throughout history, there is always competition like that, but nowadays you don’t have pure one-on-one combat. It’s a great test of who’s the best one in the ring. It’s very raw and that’s why people are drawn to it. As I said, it’s like a dance, it’s beautiful violence. It has a beauty about it, when you are flowing and you are in the zone – everything is coming together – there’s nothing better. To be fully immersed in something in the moment is hard to achieve these days, and fighting is one way of doing that. Also to push yourself mentally and physically to be better than someone in front of you.”

It’s not very often you can say you are at the forefront of history, which is pretty incredible.

Boxing is traditionally seen as a male-dominated sport, but things seem to be changing. In our interview with Claressa Shields, the “GWOAT” said she sees all the interesting fights being made in women’s boxing. Hannah agrees but adds that there is more to be done. “I think we are in the process of moving past the traditional view. Women’s boxing has taken a meteoric rise since the pandemic. Probably the only sport that progressed throughout the pandemic and was able to grow was women’s boxing. But that just shows you how much lack of airtime and lack of awareness people had before that. Women weren’t put on cards, it was male-dominated, and nobody wanted to watch female fights. Often I used to hear ‘oh it’s the chicks fight, we’ll go to the bar.’ Now it has massively changed and people have a different appreciation for it. It is still male-dominated, but things are starting to come through. I am very proud as a world champion to be at the forefront of that. It’s not very often you can say you are at the forefront of history, which is pretty incredible.”

Hannah has stood in the ring in front of both Claressa Shields and Savannah Marshall. She holds a loss against both but had to go up to their division to challenge them. Hannah sees this as the big fight for the bigger weights in women’s boxing. As there is no heavyweight division, the middleweight is the women’s equivalent. “160 is the superstar section. The fight is fantastic and the fact that it headlines an all-female card is pretty special.” Hannah has worked with Claressa Shields in the lead-up to her fight and stands by what she has said. She sees Claressa winning on points, and knows Shields would be ecstatic if she got the knock-out she predicts. “She has more experience at an elite level, she’s a three-weight world champion, and her ring IQ and ring gamesmanship are fantastic. Use of distance, judgement, timing – she has a little bit more than Savannah. However, I can’t wait for the fight!”

As I ask about her two fights with Swedish athletes, my connection gets interrupted, but I catch just enough to hear the champions’ amusement at the question. “Swede’s in particular?” she says with a laugh through the lagging connection, but she answers insightfully. She holds a loss against Patricia Berghult by unanimous decision in 2019, and a win over Maria Lindberg in 2021 by unanimous decision. Professional boxing has only been legal in Sweden since 2007, but Hannah says she has had a lot of great times training and sparring with Swedish fighters and in Sweden. “There are some great fighters that come out of Sweden.”

The next challenge is former World Champion Terri Harper. How does Hannah prepare for a fight? She has had a fantastic 12-week camp, she says, pushing her body to the max. She has sparred with first-class athletes, including Claressa Shields in America. She thinks she has had the best sparring one could ask for and is excited to showcase what she has been working on. “As a World Champion, there are no easy fights at this level. You prepare diligently and I prepared for this fight as I prepare for all of my other fights. I feel great, my body is in the best shape of my life, so I’m very excited about fighting on Saturday.”

How will she ensure to take home the win? “Whether I stop her, knock her out, or beat her on points, it’s the same result. My arm is getting raised as the winner and I will be keeping my world titles.” I try to dig a little deeper and ask if she has a favourite punch, but the well-rounded fighter responds swiftly stating “not really! I just like to fight. I don’t favouritise anything, I just enjoy getting into the ring.”

The next steps remain to be seen. For the moment, the reigning champion has here eyes set on the forthcoming bout and the opponent. She focuses on one opponent at a time but is sure there will be more challengers around the corner. “I’m in a very exciting division at the moment. Many fighters are joining and leaving the 154 division. But as far as I am concerned there is nothing happening until I get my arm raised on the 24th when I beat Terri Harper.”

Watch the fight live on DAZN.