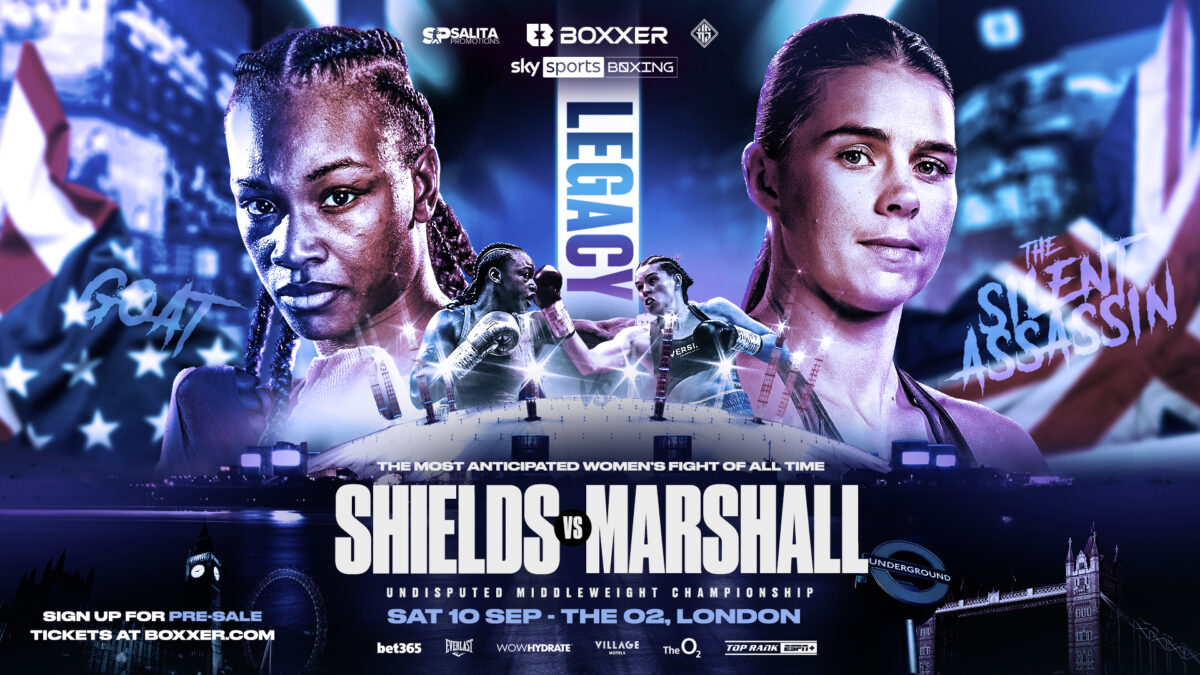 On September 10th, London will host the biggest fight in women’s boxing to date. Claressa Shields takes on Savannah Marshall in foreign territory but promises the make the ring walk determined to win.

Claressa Shields has done the impossible. She is the only boxer in history to hold all four major world titles in two weight classes. Add to this two Olympic gold medals and an MMA career with mixed success. This athlete clearly has no scruples about going after what she wants. Yet, she has one loss to her name, amateur or professional, and that is to her next opponent: Savannah Marshall. They will face off again on September the 10th at The O2, at what promises to be the most significant women’s fight so far, where Shields enters the ring as the reigning and defending WBA, WBC and IBF World Middleweight Champion, while Marshall will wear her WBO strap.

Shields started fighting so that her father could live his life vicariously through her. Her father has always been her biggest inspiration, and when he told her that if he had stuck to boxing he would never have gone to prison, she decided she was going to box for her dad. I asked her to expand on why she believes people fight in the first place, and why we are drawn to it. “We are all attracted to fighting because everybody wishes they could fight. We all want to pick a team, we all want to pick the person whom we have something in common with to win. People say race doesn’t matter, but a lot of black people support black fighters. Even putting race to the side, we chose someone who is like us – talks like us, or has an attitude like us. We see ourselves in them and cheer for them. We all want to pick a team and deep inside we all wish we knew how to fight like that, and we want the person whom we identify with to win the fight. Boxing is a sport and there is so much skill involved so some people don’t care about what they have in common. They just look at the facts; ‘OK on paper this paper has 12 world titles and this has 3. This one has 3 divisions, this one has 1. This is 1 vs 2. You don’t know who’s the best until they resolve the issue. I know so many people from different walks of life who look forward to watching my fights, women in their 60s and 70s for example. They want to see my press conference and reach out to me.”

Building on this, I wonder how she views this fight which is called “the most anticipated women’s fight of all time,” and if she has once and for all shown the world that boxing is not a male-only sport. “All of us girl champions have shown that boxing isn’t male-dominated. Right now we are getting the best fights made in women’s boxing. Not in men’s boxing. You got Tyson Fury vs Deontay Wilder, but we haven’t’ gotten Spencer vs Crawford. We haven’t got Garcia vs Tank. Or Tank vs Stevenson. In the women’s we get the best fights made. Those are the fights you want to see in women’s boxing.”

There has been much hype surrounding this fight and much talk about the long-lasting rivalry between the two athletes which will finally be resolved in September. The press conference with the athletes included a heated exchange and Shields is out for redemption against Marshall. But is it really personal or is it merely a tip in the career? “It’s a step in my career. She is just somebody who is in the way, and my job is to destroy her. To beat her. And that’s what I’m going to do.”

How does she plan to execute this next step in her career? Simple: her boxing skills. “My different boxing styles. My punching power. And my experience. I have been at this level for a very, very long time, and I am going to use everything – mentally and physically – to make sure I get the job done. It won’t be a split decision. It will be a unanimous decision for me or a KO.” When competing at this high level, having held titles and dominated for so long, how does one stay motivated? “What really keeps me motivated is not really to be the best woman’s boxer, but to be on the men’s pound-for-pound list. If I can be the girl that goes from 90 to 100, I should be able to knock out my opponents. I want to be a better fighter and figure out how I get the knockouts after beating someone 90 to 100. How do I make a 90-100 a 6 round knockout? If I am that dominant, which I am. I want a 6th or 7th round knockout. I need to keep working to get to that place where I am knocking out fighters because I’m already beating elite fighters. I am that good. Girs who are undefeated. And I’m smashing them. But I want to get better for myself, so I know I won’t be going 10 rounds, I’ll knock them out in 5 or 6. It’s not that I can’t do it, I just need to keep building myself up to get there.”

Shields is looking to build her legacy.

Dmitriy Salita, CEO of Salita Promotions and manager of Claressa Shields, said ”Shields vs Marshall is going to be one of the most significant sporting events of our generation inside and outside the ring. I am grateful to co-promote this historic event with BOXXER on the Sky platform. It will be a fight to remember inside the ring and another example of why Claressa Shields is the GWOAT.”

The fight will air LIVE and exclusively in the UK and Ireland on Sky Sports, and in the US on ESPN+