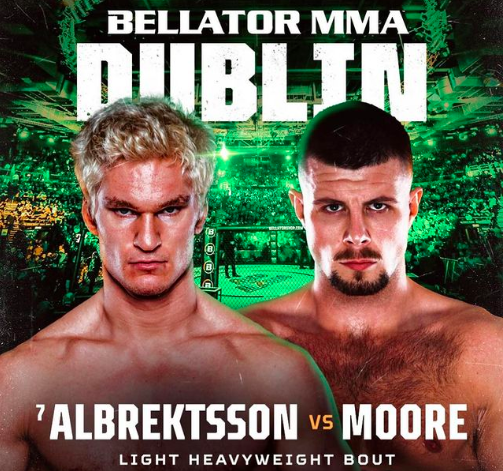 Karl Abrektsson is touted as one of the top Swedish athletes competing in MMA today, and with a record of 13-3, it is hard to disagree. On September 23rd, he steps into the cage again to prove his place amongst the titans of the sport.

The Swedish light-heavyweight with lethal striking comes across as a genuinely kind person when one speaks to him. Strikingly, as I ask him how he started his career in mixed martial arts, he pauses and says “because I was unruly as a child.” At parent-teacher meetings, they asked him what he would like to do in his life, to which he replied “I have always wanted to try boxing!” Shortly after that, he and his younger brother visited a nearby boxing club and joined it. They were hooked and fell in love with the sport, but when his brother tried Pancrase, Karl thought he would be at a disadvantage to his brother who would now know locks, grappling, and takedowns, so he realised he too would have to join an MMA gym. That was 15 years ago.

I am going to knock this guy out. Which round, however, doesn’t really matter.

Now he prepares for Bellator 285, fighting against another Karl – Karl Moore from Ireland – in Dublin. The Swede signed with Bellator already in 2019 and has fought for the organisation three times to date. How does he prepare: is it the same every time or is it specific to the opponent? “It offers a bit from each opponent, but my usual tactics will probably work on this chap.” Without revealing too much about his game plan, “The King” is going in for the knock-out and believes a stand-up fight is to be expected. “I am going to knock this guy out. Which round, however, doesn’t really matter.”

Albrektsson holds a record of 13-3. In our sport, however, numbers aren’t always representative. One of Karl’s losses is to Jiri Procházka; the incumbent UFC light-heavyweight champion. That was nearly 5 years ago, and a true test of their calibre would be greeted with great enthusiasm as the two fighters have honed their skills in different organisations. Karl has also won the majority of his fights by KO or submission, rarely letting the decision go to the judges. He is undefeated in his last 4 fights and seeks to expand this streak in his bid for the Bellator light-heavyweight belt.

I ask how it feels to be fighting an away game, where Moore has home advantage. Karl is unfazed, saying “I’m used to it, it’s almost always an away game.” Usually, it is many hours away, but Dublin is closer to Sweden than America, for example. He isn’t concerned at all and doesn’t think much of the purported disadvantage. Sweden has hosted several MMA events, including six UFC events, but Swedish athletes are used to travelling far to showcase their skill-sets. Why, I ask, does he think Sweden has done so well in combat sports? “We are disciplined. We are very good at being organised and structured. We have plenty of organisations in MMA, we focus a lot on education and training. I think we are very disciplined, which is something instilled from an early age at school: get up early, go to school, work hard, and so on. That is surely the foundation.”

The King began his career boxing, but does he have a favourite art or style? He responds that he is schooled in MMA, and thus a well-rounded fighter. Yet, he does have a favourite move: “the best feeling is when you have taken someone down, they are lying down, and then you can let the elbows rain down over them. You let gravity do its work, and it doesn’t take too much effort.” It remains to be seen if this tactic comes in handy against his namesake on the 23rd of September.

Karl adds that he wants to thank the legendary coach Omar Bouiche at Pancrase, as well as Stark Jiu-Jitsu, Coach Sargon at Sweden Top-Team, and All Stars Gym, where he has been preparing for the forthcoming bout.

More information and the full fight card is available here.