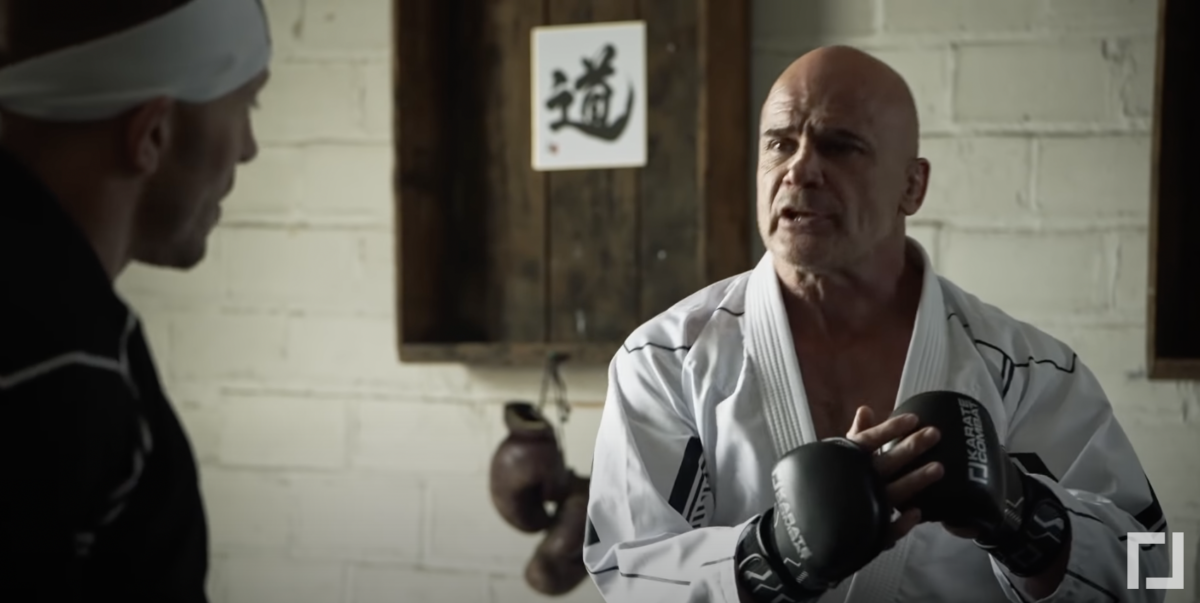 The legendary MMA world champion Bas Rutten is now a brand ambassador for the promotion “Karate Combat” which was launched in 2018. We spoke to him about his own karate background and what makes Karate Combat unique amidst other promotions.

In the 1990s, Bas Rutten was the King of Pancrase. Later, he became the Heavyweight champion of The UFC. His MMA laurels are legion, and they have been recognised by The UFC who placed him in their Hall of Fame. Today “El Guapo” is an ambassador for Karate Combat, promoting his first love in martial arts. I asked him how he first got into karate. “For me, it started as a necessity,” he says unhesitantly. Rutten was a very sick child with a severe skin disease so he had to wear gloves, blood would come through, and it was, by his own description, an eye-sore. This didn’t go unnoticed by his young peers at school. They thought it was contagious and bullied “the weird kid.” After many years of this, he saw Bruce Lee’s Enter the Dragon with his brother, sneaking into the movie theatre as the film was meant for those 17 years and over. Rutten thought to himself “if I become like Bruce Lee, then I’ll take care of the bullies.”

It took two years to convince his parents to allow him to try martial arts, as they had always seen it as very violent. They broke after his incessant nagging and he started taekwondo and karate, being taken under the wings by a tough neighbourhood boy. Rutten was brought along to adult classes and he was soon seen to have advanced skills in martial arts, beating some of the adults in sparring matches. As a child, hearing that one is talented, spurs one to more action, especially if one is used to negative comments such as Rutten was. His confidence was rising, and with this newfound confidence, he challenged the main bully in his school.

Accompanied by 6-7 of his friends, the head bully shouted “hey leper!” after Rutten from his bicycle. Accustomed to no consequences, they all laughed and carried on their way. But this time Rutten shouted back. They stopped and started to chase him. Rutten put his own bike on the side and decided he was going to run from bullies no more. The kids surrounded Rutten. “The main bully started shouting at me to hit him. So I did!” With one punch the bully was down. There was a problem, however, as Rutten had broken the kid’s nose and now they had to get to the hospital. Arriving there, his parents were informed, and their initial suspicions as to the violent nature of martial arts were confirmed. In their defence, Rutten adds, his parents had no idea about him being bullied. She had a lot on her hands taking care of her son’s ailment. He didn’t want to add to her worries and kept the bullying to himself.

The life I have is all because of fighting.

Now Rutten wasn’t allowed to practise martial arts. But he had had his taste and made a list of all those who had been bullying him. He chased after every one of them and ticked them off the list. Even to this day, he recalls a teacher who kicked him in the back so hard that the chair broke. “If I saw him today, I might slap him” adds Rutten laughing and smiling, saying “I wouldn’t knock him out. Just put a little fear in him!” It’s hard to let go of certain things when the bullying is so ingrained. But Rutten has got himself under control, through martial arts and his Catholic faith which he speaks very emphatically and emotionally about. All of this energy led to a spectacular MMA career.

FROM KARATE TO MMA

Going after the bullies and with this, bettering his skills, Rutten improved his boxing and spent hours training on his own so that people thought he had black belts in martial arts. He didn’t, although he had developed impressive moves.  At the age of 20, he moved out of his parent’s home and tried joining a karate gym again, but having had a taste of full-contact sports, he signed up for Thai boxing. From there, he fought his first fight within 2 months.

Later Rutten receives a call. The strange hating was that he had a habit of not picking up his phone, but something told him to. He picked it up and a voice said “get in your car now, there is a try-out in Amsterdam with an organisation from Japan looking for fighters.” The first sparring was hard, and he asked the opponent to calm down or he would have to counter in style. There was no calming down, so Rutten knocked the guy out with a high kick to the head. September 21st, 1993, he was fighting in Japan. He’d never been on a plane, never been that far, but now his life changed. “The life I have is all because of fighting.” He won the fight.

Since karate was one of his earliest sports, Rutten was always deep into karate. He was trained in Kyokushin karate (full contact except punching the face, although you can kick and knee the face) and retained a love for the sport. He received another providential call, this time being asked to be a brand ambassador for Karate Combat. “You don’t have to ask! I was waiting for something like that almost because, normally, karate is not full contact – it is semi-contact right now in the Olympics. Karate Combat is the only one in the world that is a special rule full-contact promotion.” Olympic karatekas are joining Karate Combat for full-contact fights. The bouts are held in a pit. “It sounds really scary but it is not. If you go to karate.com you will see what it is! 45-degree angle walls. So nobody can lock you up, you can run the walls. You can do flying kicks. Takedowns are allowed! Some people take someone on their shoulders, run up to the walls, and then put them on the ground. And once they’re on the ground, you are allowed to reign down punches for 5 seconds. Some fights have been stopped like that. So everybody grows into it and there’s so much respect!” Martial arts is about respect, and here Rutten proudly speaks of no name-calling, no shouting in each other’s faces. “If there is a moment that these guys don’t like each other and get in each other’s face – there is no profanity. And as soon as they step away they bow to each other and it’s good again. I like it, I get goosebumps now! That’s what fighting is about. That’s what a man is about. That’s the only thing we are asking. That’s karate.”

Rutten sees another potential benefit with the new promotion: family entertainment. Children might ask to watch karate in a promotion like Karate Combat which families will probably like to watch together. Karate is accepted. Bare-knuckle boxing or MMA for a 12-year-old might still be deemed questionable by many parents. So Karate Combat can be an introduction to martial arts and an occasion to enjoy the sport together. “The demographics are much wider for karate, it just needs to be discovered, and we are getting really big because we are the only one. The fighters just love it. And now we have fights who are great in other organisations, like Bellator, UFC, and you name it, who have a karate background, who are now coming to Karate Combat. It’s really cool.”

Find out more on karate.com and don’t miss their next bout on August 27th!