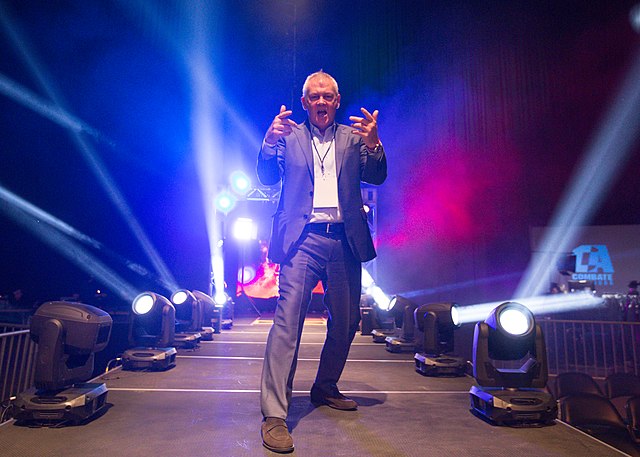 It may surprise you to know that one of the founders of the UFC has no background in martial arts. Asking Mr McLaren about how he got into martial arts, he swiftly replied “I didn’t! My background is in television. But I never studied martial arts. I can’t claim any knowledge there. What I did do was create a sport: mixed martial arts.’”

As a TV producer working in a large media company, he helped launch a new sport on the international stage. What, then, made an experienced producer see something promising in cage fighting? “I was running the pay-per-view division of a TV company. I’d had some success there, making a horror version of Iron Maiden’s final concert. It was very gory and very bloody! I got into some trouble because some of the stunts were bloodier than I had suggested. Then I did a comedy event with Andrew Dice Clay who was banned (for good reason!), but he had millions of fans. He was a phenomenon. The company did very well! I was taking wacky pitches. Rorion Gracie and Art Davie pitched me Gracie’s goofy idea called War of the Worlds. I was very impressed by the jiu-jitsu and what I did was create a real-life version of Mortal Combat.”

EARLY DAYS OF THE UFC

The UFC is now intimately associated with the name of Joe Rogan. It was Campbell McLaren who brought Rogan into the UFC. Campbell also helped arrange the match-making system and arranged the pay-per-views. Yet, McLaren is full of praise for what Zuffa under the Fertitta Brothers and Dana White has done. “They took great risks and built this into a behemoth! Tremendous, gargantuan success. I do not in any way want to take away from that. I love it and am very friendly with them.”

The road was not always easy. McLaren launched the “no rules marketing” which generated a lot of controversy. He explains that while the United States has 50 states, the UFC was banned in 49 states. Yet, they had arranged UFC events in 6 states. “Nobody ever said ‘hey, Campbell, that’s 55 states’” he adds with excitement, continuing “no one ever asked. Nobody cared. They just liked the controversy and the heat. As that grew too hot, I was invited to leave. I had become such a lightning rod and Senator John McCain was asking governors to arrest me. He was a very powerful senator. And he was mad! He was a lot mad! I left the UFC right before 2000.”

McLaren produced the first 22 UFC events, consulted for the next 8 and then Zuffa came in just around UFC 30. His mark on the sport remains as he helped develop the octagon, brought in Big John the legendary referee who helped develop the ruleset, and generally developed most of the creative elements of the company through his expertise as a TV producer. But Rorion was the fight side of the business and did everything he said he would. The Gracie involvement in the fight business continues: “Royce [Gracie] helped me launch the TV series that launched Combate.”

We will return to Combate shortly.

Has the UFC carried on in the way McLaren and the original founders envisioned it or has it developed in an unexpected direction? “That’s a great question! I’ve never been asked that.” He pauses to think for a while and responds: “I’m not surprised with the direction the UFC has taken. I think the direction has been a solid, positive, evolution of the sport. Remember, it wasn’t mixed martial arts. It was martial art vs. martial art when it started! UFC 7 – this is my take! And few people know more about it than me in my not so humble opinion” says McLaren with a cheeky laugh, “it’s UFC 7 when Marco Ruas is throwing Muay Thai low kicks, using jiu-jitsu, and boxing style strikes (particularly jabs). That’s the first mixing of the mixed martial arts. Paul Verelans, whom Ruas was fighting, said he created his own thing called Varelans Kune Do or something like that, but his martial arts were a Jeet Kune Do sort of thing. Nobody had mixed ground game and standup. That’s the real innovation! It’s a total refinement from there and that’s what the UFC has done.”

It’s one night, or it’s bullshit.

McLaren still keeps in touch with the UFC and mentions Dana White in particular. One thing he does lament is the loss of the one-night tournaments. Combate Global, McLaren’s new promotion is one of the few – if not the only one – that still keeps the tournaments. Speaking to Dana last year, McLaren asked if the UFC would ever return to that original idea. Making a perfect imitation of Dana, McLaren says the UFC has decided not to go down that route. Too much damage, they say. It’s a shame. Imagine the viewership. “It’s one night, or it’s bullshit.”

One of the most beautiful things about MMA is that it is so new, yet has older roots than any other sport. I ask if pankration played any role in inspiring the UFC. McLaren laughs again and says that’s nonsense. “Let’s talk really ancient! There’s a statue called the boxer, and it’s a 2000-year-old sculpture. It’s Roman and it’s a very powerful piece. You see what looks to me like a sub-orbital fracture, his hands are taped. There’s no gloss. That’s nonsense from the 50’s and Gladiator-style movies. But his hands are wrapped in leather and he sits in a pose that we recognise from the fight business. Complete and utter exhaustion which you get from being totally drained in a fight. There is nothing as aerobic as a fight. That’s a 2000-year-old statue, and I see today’s fighters in that. I think Sumo is the oldest martial art. But let’s go back even further. The first story in the Bible is a love story: Adam and Eve. The first human story. The next story is a f***ing fight! Cain and Abel! It’s a rock fight – but it’s a fight! None of this pankration nonsense, people have been fighting since there have been people. That’s it. If human hands were stronger than human heads we would’ve wiped ourselves out. Hands break, heads don’t.” Art Davie spoke about Pankration as an inspiration for the UFC, but McLaren sees that as misguided. The sport is as ancient as human nature itself.

McLaren is back in the fight business. How does one compete with such a global success as the UFC – a success he himself helped create? The model is different. As mentioned earlier, the one-night shows are back. They take the football conflicts and rivalries and transfer them to combat sport. It’s nation vs nation: “USA vs Mexico. France vs Spain – that goes back to Napoleon. Argentina vs everyone! We do these classic rivalries because my fighters are not well known, but people cheer the flag. They cheer the tribe. David vs Goliath. William Wallace, for the Scots. And so on. It’s more about representing your group than any sort of historic ‘pankration.’ There has always been fighting. At some point, someone said, ‘if I punch with my left and follow with my right, I’m really going to hurt the guy more.’ Or, ‘if I kick him in the groin that’s going to be better.’ People start to develop techniques – nothing to do with pankration. It has everything to do with the fact that people like a fight. You know that if you are at a sporting event and a fight breaks out in the stands, everyone watches this fight.” McLaren adds there may be an intellectual attempt to put a cultural or historical gloss on what we like, but, in truth, what we like is controlled violence.

If human hands were stronger than human heads we would’ve wiped ourselves out. Hands break, heads don’t.

With Combate, McLaren had no wish to compete with UFC and become #2. He could continue with his successful TV production career. But the calling back to MMA was too strong to ignore. Looking around he saw the UFC lacked Hispanic athletes and their relationship with the Mexican audience wasn’t good. “The UFC has focused on countries with good sports infrastructures, which primarily comes from bulging out support for Olympic athletes. Russia and China, have all invested billions to build out their sporting infrastructures. Look at Mexico which has a horrid track record in the Olympics because the government doesn’t invest. There’s a reason why the UFC doesn’t go to Mexico or Peru or Chile. But I found a great tradition of fighting (particularly boxing) and a spirit that resembles Irish fighters. There are 60 million Hispanic people in the USA, so I can reach them. In North America (Mexico and the US), there are more people watching Combate than the UFC, every Friday. In Spain, I’m doing 70% of the UFC’s viewership. 1% of my audience according to Nielsen watches the UFC. My average age of viewers is 20 years younger than the UFC. Get this, my audience is 51% female. Why? Our girl fighters are the most exciting girl fighters in the world.” McLaren summarises the differences succinctly: “The UFC has the best fighters in the world aged 25 to almost 40. Combate has the best fighters in the world up to 25.”

You can watch Combate Global Univision, Televisa, TUDN, CBS Sports Network and Paramount Plus. Find them on www.combateglobal.com.