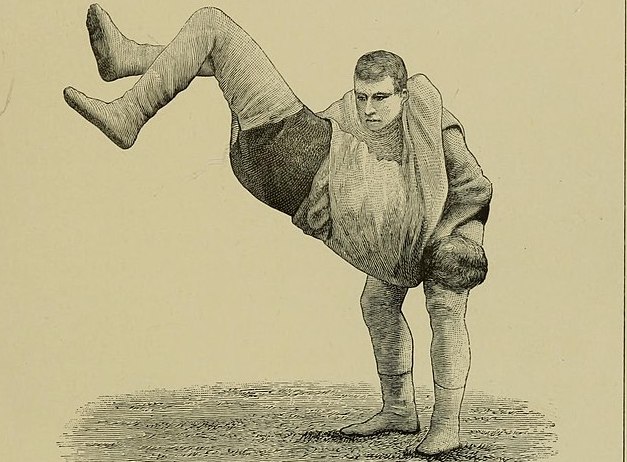 Known in the native tongue as Omdowl Kernewek, Cornish wrestling has been on the British isles for millennia. In the local dialect, it is called “wrasslin” and consists mainly of throws and trips. There is no ground game in Cornish wrestling, and the wrestlers wear a special jacket. The aim is to throw the opponent, ensuring that he lands as flat as possible on his back. All holds have to be taken on the jacket, meaning no wrist control is allowed. However, the flat of the hand is permitted to be used when pushing or deflecting a combatant.

Four pinning points are found on the wrestler’s back: two by the shoulders and two on the lower back. You score points when you throw your opponent onto the back, and the number of these pinpoints that hit the floor determines the number of points scored. If you score three or four points you earn what is termed a “Back” and the fight is finished. The judges are called “sticklers,” from which the popular term synonymous with “pedant” is derived. These sticklers award points by raising their sticks when they believe a Back has been scored. Such a Back is given by at least a majority (two out of three sticklers). If no Back is scored during the bout, the winner is determined by the overall amount of points acquired.

The wrestlers all have to swear an oath before any wrestling takes place. In English, the oath is:

on my honour and the honour of my country, I swear to wrestle without treachery or brutality and in token of my sincerity I offer my hand to my opponent. In the words of my forefathers “gwary whek yu gwary tek”.

The last part, translated from the Cornish, means “good play is fair play” – which is also the motto of Cornish wrestling. Before any match, the wrestlers have to shake hands. It is said that before the 1800s, wrestlers would have to renounce the use of magic before their fights. Even further back in time, matches were sometimes held in churchyards. In 1297, the Bishop of Exeter put a stop to such practices in Devon and Cornwall.

Cornish history has a long and distinct history. A lot of the history is said to go so far back that it is shrouded in mystery. I visited the annual Royal Cornwall Show this year, where the Cornish wrestlers have their regular tent, and the man behind the table started explaining the history by taking me back to the first ice age. “I digress,” he kept saying, as the history went further and further back in time. Yet his point is well-founded: The very first mention of Celtic Wrestling is in the ancient book of Leinster (c.1160 AD), where the sport is included in the Tailteann Games, dating back to at least 1829 BC. The British Isles are often associated with Anglo-Saxon and Norman history. Occasionally, the Vikings make an appearance up in the North. In the 9th century AD, Danish Vikings fought alongside the Cornish against Anglo-Saxons at the Battle of Kingston Down. Nevertheless, the ancient isles have been populated by Celts for centuries prior to that, and this is what my enthusiastic interlocutor was alluding to. The Cornish, of course, are descendants of the Celts.

Cornish wrestling, in other words, predates the Roman invasion. In the Middle Ages, the Cornish contingent at the Battle of Agincourt (1415), fighting with King Henry V against the French, fought under a banner which depicted two wrestlers “in a hitch” (or clinch). Writers such as Chaucer, Shakespeare and Michael Drayton have written about Cornish wrestling. On the website for Cornish wrestling, the association writes:

Wrestling is our national sport in Cornwall, a direct living link with our ancestors handed down through an un-broken chain, from father to son, brother to brother and friend to friend for over 3,000 years.

In the 1900s, Yuki Tani, a Japanese judoka, visited Britain and competed in Cornish wrestling. In the late 1920s, Yani competed in Cornish wrestling at an amateur level, with some success. Yet, he had lost many bouts in his first attempts and claimed in regard to his teachers that “ they are kind and teach me what is right and what is wrong and from that I shall be able to develop my own plans, so that when I come to Cornwall I shall have a little knowledge and confidence, and shall endeavour to do my best.” The sport migrated to the United States where many Cornishmen migrated, amongst them Robert Fitzimmons – the world’s first three-division world champion – who had himself been a Cornish wrestler in his youth. Even a Swede, Charles Dufstrom, known as the ”terrible Swede”, fought in the United States and won the world Cornish wrestling title in 1912.

Sadly, there aren’t many practitioners of this venerable art anymore. Yet, at the Royal Cornwall Show, there were perhaps around 10 wrestlers demonstrating the art. I was allowed to throw my hat in the ring and try a few throws. The rules are precise for scoring, but rules as to where you grab the jacket and exactly how you want to execute your throw seem looser. There are various governing bodies both inside and outside of Cornwall, but the numbers are few. It would be a shame to lose such a historic art, which deserves a place within the pantheon of martial arts.