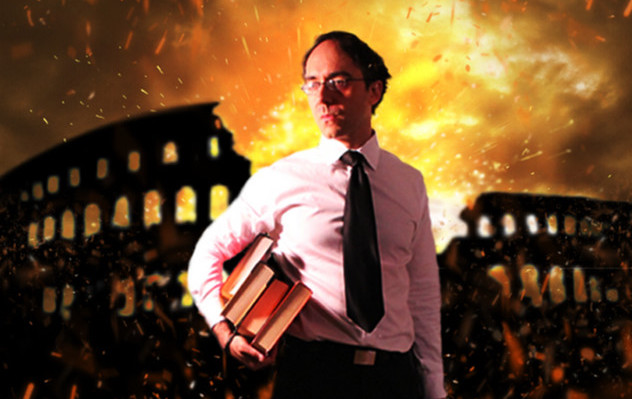 The world of academia is seemingly full of aversion towards sports, especially violent sports. As John Milbank, Emeritus Professor in the Department of Theology and Religious Studies at the University of Nottingham, recently wrote on Twitter: “Lots of academics like to ask ´what causes violence’? But all evil is violence and all violence is at best necessary evil. There is no single cause of violence any more than of evil. Violence is not a single aberrant pathology; it is everywhere.” Naturally, Milbank is referring to violence at large and not combat sports, but the question is not unrelated. An exception to the rule of applying philosophical insight into violent sports and why we are drawn to violence is Professor Daniele Bolelli.

Professor Bolelli is no typical academic. He teaches wide-ranging courses at California State University and Santa Monica College, while holding black belts in Judo, Brazilian Jiujitsu, and an eight degree black belt in kung fu san soo. In 2008, he published the book On The Warrior’s Path, which treats fascinating and equally important subjects, yet in a humorous style. The book is a tour de force asking us to consider martial arts from a philosophical perspective, while drawing insights from martial arts and applying them to everyday life.

Bolelli argues that we need to focus more on the body in philosophy. I entirely agree with this, and while the point is crucial, I disagree with his inclusion of Plato in the canon of ‘anti-body’ philosophers. After all, Plato was himself a wrestler and competed in the Isthmian games, and in many of his works (Laws, Politeia) argues strongly for the training of the body, and even states internal chaos in the soul is treated by external exercise. His emphasis on the soul points to the highest part of man – reason – but he does not for that reason downplay the body. Speaking to Professor Bolelli, he maintained that Plato over-emphasises the Realm of Ideas and draws attention to the mind and soul, sometimes at the expense of the body – but he agrees that it is a question of degree. Christianity, in certain iterations, would later develop a more refined anti-body stance.

Fighting is the visual representation into the conflict we all deal with.

In one chapter of the book, Bolelli draws on the many martial arts which derives from warfare, and writes that weapons forged by oneself are better than cheap mass-produced ones, and that this is true of all organic, homemade artefacts. It seems that we live in a world of instant gratification and mass produced garbage, and he rightly asks us to reflect critically about this. This readily brings Heidegger’s philosophy to mind, who insisted that we have lost sight of being (or what we might call our place in the world). Authenticity is lost at the expense of mass-production and homogeneity. Instead of finding ourselves at home in the world, we seek to escape it with the aid external objects.

One point seems to run through the book: people today lack life and energy. I recall running into an old classmate a few years ago – one of the brightest and most hardworking in my class. He now works at one of the top law firms in Sweden, but looked completely empty inside. It was painful to see. Hard work, seemingly for nothing. Nonetheless, people today do exercise, in fact often obsessively so. Perhaps this is due to a fear of death. Many top businessmen and lawyers run marathons. Yet, it seems to be only a means to keep going, to stay active, and to forget about reflecting on deeper questions, which martial arts – as Bolelli writes – invite us to ask.

While speaking to Professor Bolelli, I ask him why he believes humans like to fight. His reply was insightful: “We all deal with conflict: in ourselves, such as laziness, and not only with others. We fight with our own resistance. We all deal with it. So we all understand what struggle is. There is one side of yourself and another. We fight with questions about who we want to be. There is an external reality frustrating who we want to be and an internal drive. We admire when we see others fight or when we see it in ourselves. When we overcome what is weighing us down. We are naturally drawn to it. Fighting is the most obvious level because it is simple, and not much thinking is required. Fighting is the visual representation into the conflict we all deal with. Sure, at face value it is one person versus another; but it is also a representation of what we go through in ourselves.”

There was no Jigoro Kano in Europe. Martial arts seemingly became obsolete.

As mentioned above, Bolelli identifies a lack of focus on the body in – particularly Western – philosophy. I ask him if he believes there is a difference between the West and Asia when it comes to relating to combat sports. “ Well is it more associated with Zen in Asia today. But you also find it disassociated from all that at times. The Samurai, for example, were hired killers, not philosophers. Martial arts later became other things, such as a way of personal cultivation. In Japanese martial arts this is more preserved. It used to exist in Europe, with boxing and wrestling, but when we lost the original reason for martial arts – to be used purely for combat – we no longer needed to reflect on it. It became anachronistic and got lost along the way. The founder of modern Judo, Jigaro Kano, showed a different path were fighting was no longer only for war. He found a new function: education and personal formation. Kano gave new meaning to a practice that had existed for different functions.”

A Western critic of the alleged anti-body trend in Western philosophy is Nietzsche, and Bolelli continues, “Nietzsche criticised the tendencies in a lot of Christianity which seems to have a slight aversion to the body, but he was not martial artist himself. There was no Kano in Europe. Martial arts seemingly became obsolete.” Through the work of people like Professor Bolelli, we could hopefully be on our way to rectifying this historic blunder.

Professor Bolelli’s podcast History on Fire in available on Spotify and his books can be found on Amazon. His website is available here.