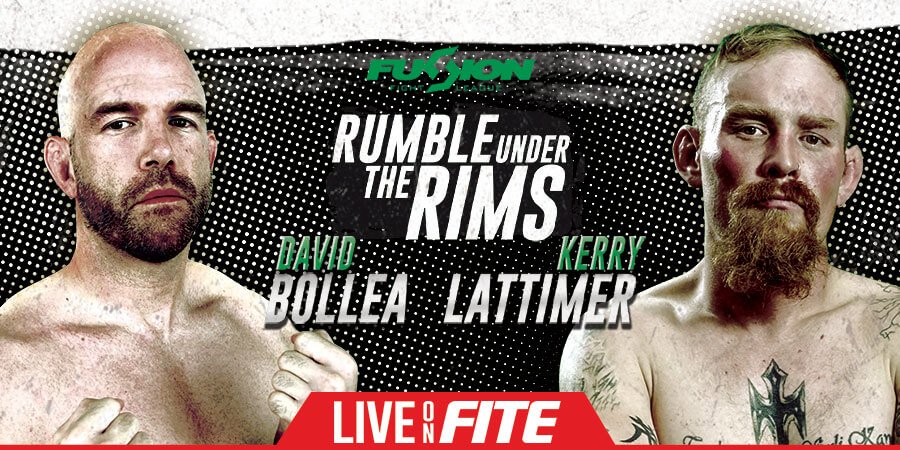 Tonight, Fusion Fight League has a stacked card a with the historic element of Biaggio Ali-Walsh making his MMA debut. Read about tonight’s event and an interview with Ali’s grandson.

Live from Billings, Montana Fusion Fight League puts on a night of world class MMA tonight on FITE! The main event features David Bollea facing off with Kerry Lattimer, and Muhammad Ali’s grandson Biaggio Ali Walsh will make his MMA debut: ”I want to continue the tradition of fighting in my family!”

Fusion Fight League’s Rumble Under the Rims at First Interstate Arena – MetraPark Arena in Billings will be streaming live on FITE. The main event is David Bollea aka ”King David” of Xtreme Couture Las Vegas vs Kerry ”The Batterer” Lattimer of Idaho in the 155 Pro category.

The card also features a debut bound to attract global interest: Biaggio Ali-Walsh, grandson of Muhammad Ali, fighting out of Xtreme Couture in Las Vegas, who makes his MMA debut against Devin Rothwell in an amatuer bout.

Fusion Fight League: Rumble Under the Rims is $19.99 live PPV or get it live with the FITE+ subscription – just $4.99/month.

Q:How long have you been training?

Ali-Walsh: I have been training MMA for a total of about 2-2.5 years now. Covid hit shortly after I began training so there was obviously a lil delay but I worked out in the garage during that time.

Q: Are you a striker or a grappler?

Ali-Walsh: I would say that growing up in the world of boxing would make me a striker but I do find myself pretty well-rounded. I began training with no specific base and started learning all the disciplines at the same time.

Q: What made you decide to try your and at MMA?

Ali-Walsh: After college football I felt very lost and didn’t like where my life was heading. Pursuing MMA makes me feel more emotionally, spiritually, physically, and mentally positive.

Q: How does your mother feel about your new career venture?

Ali-Walsh: She is nervous as any mother would be. But she will support me and be by my side with anything I want to do.

Q: What made you get back into combat sports

Ali-Walsh: I did no previous combat sports before MMA. I was always just a huge fan of martial arts and boxing.

Q: How did you end up at Xtreme?

Ali-Walsh: My friend trained at Xtreme and said it was a great gym so I went in for a day and the rest is history.

Q: What do you want to accomplish with MMA?

Ali-Walsh: I want to become a champion. To be it doesn’t matter the organization or promotion. I just want to make a name for myself and continue the tradition of fighting in my family.

Q: How do you balance time with modeling and training?

Ali-Walsh: There is no balance between modeling and training because I am rarely ever modeling. My last modeling job was in 2020 so those type of gigs do not happen so often. I am solely focused on finishing college and getting better in the gym. If a paid modeling job were to come up, I want to make sure it works around my school and gym.