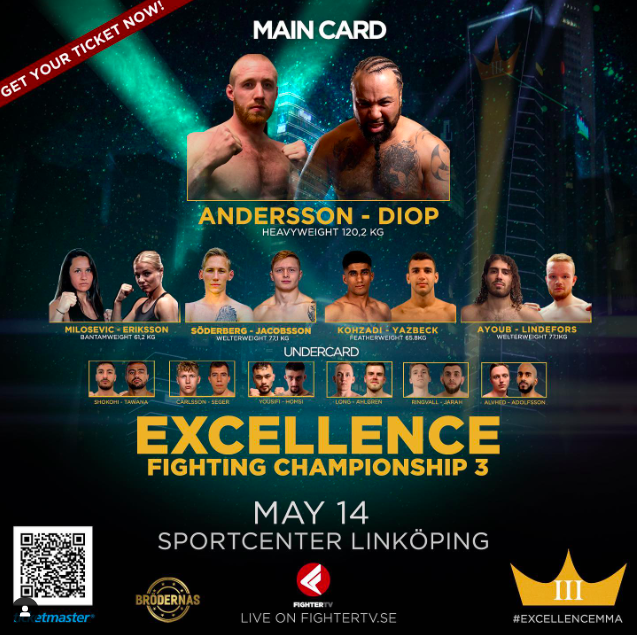 Excellence FC III returns for the first time since the beginning of the pandemic, taking place in Linköping Sportcenter. We spoke to Millie Eriksson and Nikolija Milosevic about their preparations and predictions for Saturday.

On Saturday, Swedish heavyweights Jonnie Andersson and Salif “Black Viking” Diop will clash in what promises to be an exciting MMA fight. Andersson is heading into his first professional bout, while Diop has one professional bout which he lost against Nermin Hajdarpasic in March last year. Prior to that he has two losses and one win as an amateur. Andersson’s amateur record is a mixed bag, with three loses and three victories.

Another bout to watch out for is bantamweight bout between Nikolija Milosevic and Millie Eriksson. Milosevic has an amateur record of 5-0, and Eriksson steps into the ring with a record of 4-6. Eriksson’s foundational fight style is Thai boxing and she is currently in a two win streak.

We spoke to both Milosevic and Eriksson about their preparations. Eriksson commented:

“I have prepared as I always do for matches – no different for this one. I trained hard and I am well prepared. Can’t say how the match will unfold exactly but I have a job to do I and I will get it done. You will see more on Saturday!”

“The fight will end with a finish! Hard work on the menu every day. No rest for the wicked!”

Watch the fights on Fighter TV