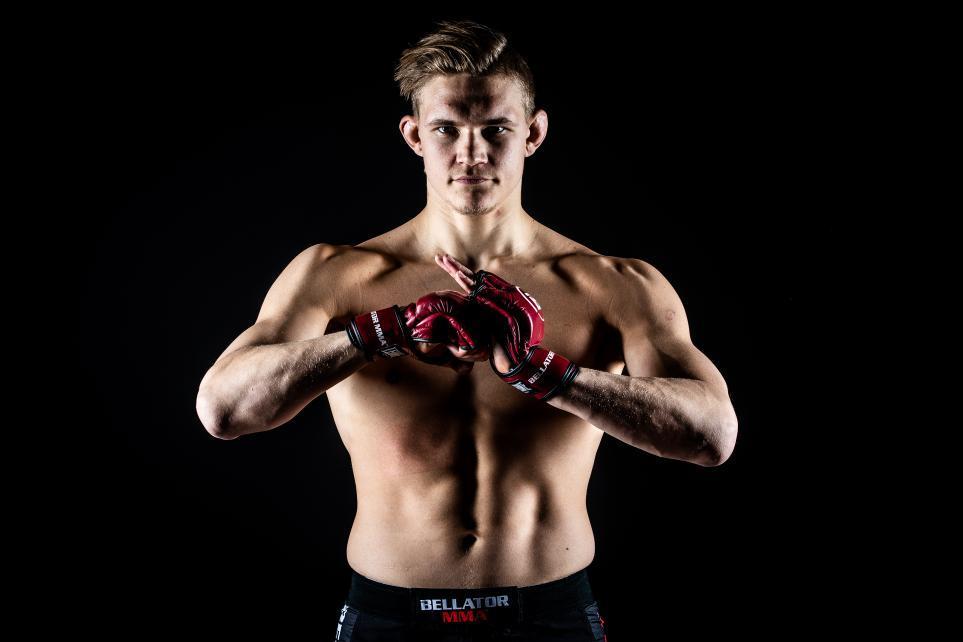 Oliver Enkamp, the 30 year-old Swede fighting out of Pancrase Gym in Stockholm, is set to meet American Mark Lemminger this Friday. Both Enkamp and Lemminger are coming out of losses. We spoke to Enkamp about his preparation, his love for Martial Arts, and his plan for the fight.

Enkamp landed in London on Monday earlier this week. The fight week has been shorter as the fight is on Friday, and his last serious training session was last Friday. But the road to Bellator 281 started already as a boy. His family ran a karate dojo, with his two-year older brother having started karate at around 2-3 years of age. It was natural for Oliver to start as well, but was much like going to his parents place of work. Putting on the gi was more associated with visiting his parents work-place than training karate. Slowly, an interest developed for Oliver, while his brother was already deep into the history and culture of karate. Oliver, however, broadened his horizon and looked into kickboxing, jiu-jitsu and other martial arts. The dojo run by his parents added other artforms and developed into a martial arts centre.

Eventually, Enkamp watched Lyoto Machida and Georges St-Pierre – two karate practitioners – who had success in the UFC. Both of them became champions, which spurred some curiosity in Enkamp. Perhaps, he too, could become a MMA champion with a background in karate? He wanted to test his skills and signed up to MMA Academy 2009, a summer camp for adults in Sweden. He thought he could fight, but a whole new world opened up to him. This is also when he met Omar Bouiche, a legendary Swedish MMA coach, who is still Enkamp’s coach. Karate became too limited given its rules, and Enkamp started putting other arts together before signing up to Omar’s gym. By 2017, Enkamp had a 7-0 MMA record and made his UFC debut. He lost this fight, and then fought a second fight in the UFC where he also lost, owing to a short stoppage according to him, and was soon picked up by Bellator.

PREPARING FOR THE FIGHT

Both Enkamp and Lemminger are coming out of losses. Enkamp lost to Kyle Crutchmer in December last year by decision, and Lemminger lost to Neiman Gracie in September by TKO. How does one prepare psychologically to return? Enkamp feels the circumstances surrounding this fight ensure he is far hungrier for a win. For his previous fight he had three wins behind him and was too relaxed. Now he has been humbled and lost his winning streak. He wants to regain the momentum and changing up from a relaxed attitude to a hungry wolf. He has done this before, and knows it works once he takes on a more aggressive – or mean – approach.

Turning to the game plan, Enkamp doesn’t see Lemminger as a specialist of any art. He is well-rounded, which means there is no tactical game plan. Enkamp has a long leg reach, solid foundation in boxing which he has improved over the past two years, and his wrestling is great, he believes. On top of this, his submission record is splendid. He doesn’t want to plan too much, as it can limit you. With too many expectations, you can get a mental block. I’ts better to go with the flow, he adds.

Enkamp is one of many successful Swedish martial artists competing in the various MMA promotions. I ask him why he thinks Sweden is doing so well, given our small nation. The first reason, he believes, is due to the work of the Swedish MMA Federation (SMMAF). This has helped make MMA a legitimate sport in Sweden. Even when Enkamp started, which isn’t all too long ago given his thirty years of age, it was still like working into a tough environment which carried a lot of stigma with it. Rules and regulations have endured a good environment for amateur fighters to rise. The MMA League also means people can compete several times a year, and a lot of experience can be gained. A second reason is the pioneers, such as Alexander Gustafsson. And finally, the level of the coaches is very high. Again, the name of Omar Bouiche comes up. Travelling around the world, Enkamp says famous coaches still don’t compare to Omar.

“This is something wired into our DNA. The law of the jungle. Survival of the fittest. This is something deep rooted in our body. People think of fighters as super aggressive, or as “alpha”, shoving people around. But a Martial Artist is the complete opposite. He is the master of his own emotions.”

LOVE FOR THE SPORT

It is no longer a title or a certain fight Enkamp is chasing. He has been doing this for 12 years. It used to be about him wanting to grow as a martial artist – born into it, working with it on a daily basis. But this has shifted. Today, it is more about the sport itself, where he wants to use his platform to inspire people to love the sport. His brother, Jesse Enkamp, runs a successful karate social media account, and they post videos together. They want to contribute to making the world a better place through martial arts. Becoming a good ambassador for martial arts motivates him.

I ask him to expand on this, as we are now coming to the core of what we all ask ourselves. Why do we love this sport? What is it about this primal need to defend ourselves and test our strength against others, coupled with a rational realisation that we must use techniques and read situations carefully, that pulls us into its unrelenting grip? Enkamp has thought a lot about this, and his answer makes it clear. First, he quotes Dana White, the president of the UFC. If you go to a sports event – basketball or football etc – and a fight breaks out; everyone will turn to watch the fight. “This is something wired into our DNA. The law of the jungle. Survival of the fittest. This is something deep rooted in our body. People think of fighters as super aggressive, or as “alpha”, shoving people around. But a Martial Artist is the complete opposite. He is the master of his own emotions.” Calm, cool, and collected, are the core characteristics says Enkamp. A martial artist can be ruthless, but most of the time he must be humble, and meeting professional fighters you will see that this is true. This contrast is what fascinated people.

Martial arts is also about personal growth. In traditional art forms, there is a “holy trinity”: mind, body, and spirit. The body, with muscles and strength, is only one part. The mind is something one can get more value of in one’s own life, says Enkamp, because if you have been pressure tested in your sparring, long on the floor while lunches reign down – then standing in front of your class giving a presentation is no longer as tough. The spirit comes in through learning never to give up, discipline, hard work, and how to be a good human being. Enkamp quotes Spiderman: with great power comes great responsibility. All martial arts rely on these fundamental principles. Moreover, nature is violent, and we need to know how to defend ourselves. Another quote offered by Enkamp is a classic: better to be a warrior in a garden, than a gardener in a war.

By fighting, and using the platform that comes with it, Enkamp hopes he can spread these and similar thoughts. Sadly, because money talks, the sport has been turned into entertainment. Enkamp sees this as lamentable. People are watching not because they can learn how to develop as humans, but because they want to see two men having a row, calling each other names. Enkamp doesn’t want to be a part of that trash-talk culture, and mentions YouTubers taking the ring as another example of the transformation of the sport into entertainment. Being true to yourself, there will be people who can relate to your message, he says, adding that he could never be someone who talks trash. It would be too transparent. But speaking like this, from the heart, he believes people will listen. “I represent the good guys,” he adds.

Continuing our talk about celebrity boxing, Enkamp does nonetheless see potential benefits with it. More eyes have turned to boxing. “Jake Paul has a huge audience, which might never have watched any martial arts. I don’t follow boxing, but I watched Logan Paul and Floyd Mayweather.” As long as more eyes turn to boxing, he hopes we can turn people into appreciating the more technical, tactical, and philosophical aspects of the sport. “We need to catch people’s attention first, and perhaps this is a hook to get them.”  Would he be interested in a cross-over fight? “Absolutely! I think all collaboration is good for the sport. I would love to see more organisations collaborate. Yet, some organisations try to reinvent the wheel, coming up with new rules. Three against three, no gloves, etc. Just stick to the roots!”

A true technical fighter, he prefers other technical fighters who use feints and can read distances. Anderson Silva, Jon Jones (who Enkamp believes is the GOAT), and Israel Adesanya, spring to his mind. “These are more like snipers than infantry, so to speak.” We like fighters who have a similar boy type to us, he explains, because we can relate to them. But for Enkamp many of the old greats from Pride FC stand out – Sakuraba who had the mindset of a samurai warrior, and Genki Sudo who broke the frame and did his own thing. This is how the sport develops. Enkamp’s own contribution, he though initially, was a good guard game, good striking, and a karate background. He is not the strongest or most explosive. Yet, he is endurable and flexible and can get out of any situation. He can attack from every position, and his strength is his large toolbox, full of weapons he can utilise. Rubber guard, shoulders, elbows – not just low kicks and punches. “Stamina and a wide variety of attacks” are his strength.

Returning to his game plan, he seems relaxed. “People have a game plan, they will do this and that, but under duress they forget it and go back to what they have repeated the most. You have to repeat moves thousands of times so that they are hard-wired. If they aren’t, the body won’t do them under stress. The conscious brain has to be disconnected and the reptilian brain kicks in for survival.” In other words, all repetitions, the moves, must already be in place. With these words we finish our conversation, as Enkamp returns to preparing for the gym, rehearsing moves he has done thousands of times before, in anticipation of his bout on Friday.

For more information about Enkamp, check out: