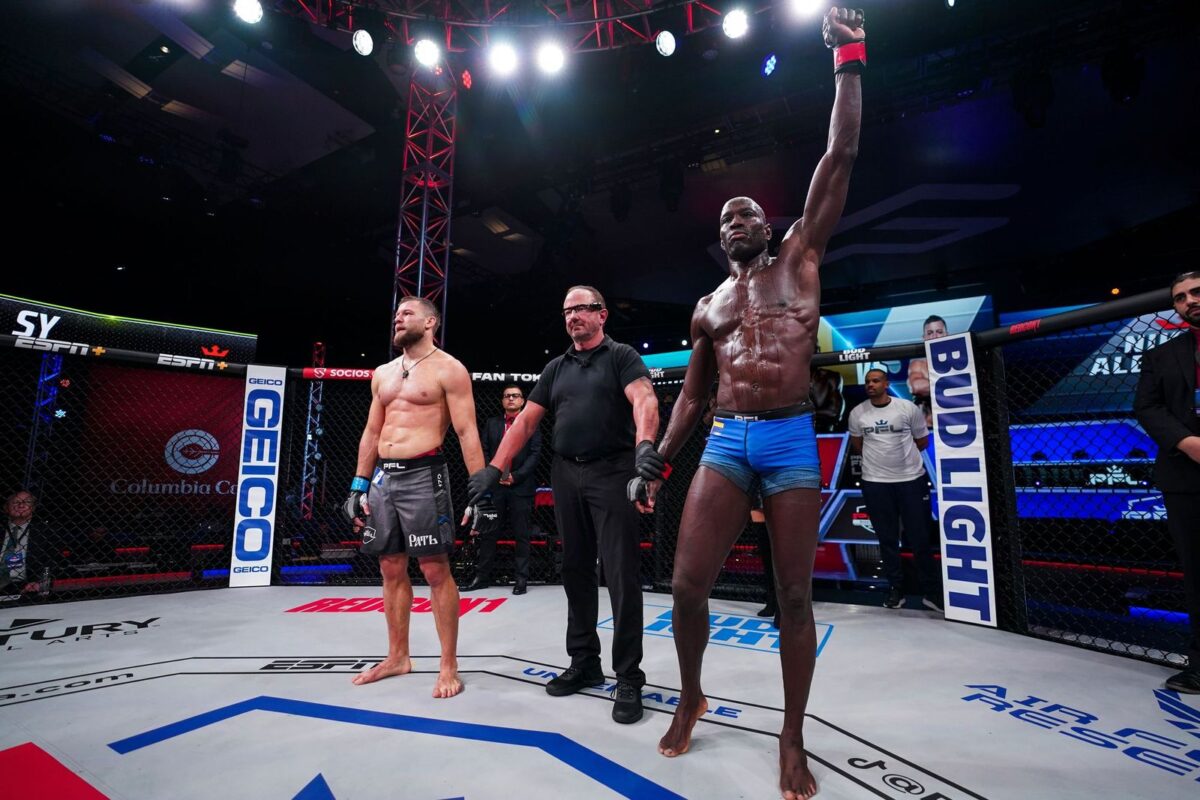 Fight fans had a superb weekend. Upset, highlight knockouts, and boring championship bouts. This weekend had it all: from UFC 274, through Canelo Alvarez vs Dmitry Bivol, PFL 3, and the Sarajevo European Cup in Judo. We also spoke to Sadibou Sy about his PFL 3 performance. Results disclosed.

Going into UFC 274 it already promised to be exciting. Reigning lightweight champion Charles Oliveria was stripped of his title for missing weight by .5 pounds. This meant that only Justin Gaethje could win the title. Oliver has dominated his last 11 fights, winning 10 of them by KO/TKO or submission. It took him only 3.22 minutes of the first round to submit Gaethje with a rear-naked choke after a superbly placed punch sending Gaethje to the octagon mat, an attempted triangle with Oliveria swiftly switched from to get the choke-hold. Oliverias win means he has extended his UFC record for most submission wins (16) and most finished (19). What awaits the champion who has been stripped from his belt? McGregor called him out, as did Chandler who called for a rematch. Volkanovski has also thrown his hat in the ring, saying he would like to challenge for the title. The vacant title beckons to the stacked division, but Oliveria seems safely positioned at the top.

The other title shot of the evening went to Carla Esparza, who challenged reigning straight champion Rose Namajunas for the title. It was possibly the most boring fight in UFC history, with not much happening at all. The champion seemed to be playing it safe, which is usually unknown in her previous matches. Esparza shot for the take-down several times – 11 times in total, whereof 2 successful. Namajunas has avenged two of her previous losses, defeating Jessica Andrade and Tecia Torres in her rematches. The only unavenged losses are against Karolina Kowalkiewicz – and now Esparza as well. Namajunas said before the fight that she is the undisputed all-time great of her division. This statement seems rather exaggerated given her performance on Saturday night. Perhaps she can redeem herself going forward, but Esparza has shown herself worthy of the title for the time being. Joanna and Zhang are due to fight in a much anticipated rematch on June 11. They both seem keen to get their hands on the title that was once theirs.

Tony Ferguson is a UFC veteran and fan favourite. He has been around for a while, whereas Chandler has rocketed into stardom seemingly out of nowhere after his debut against Dan Hooker. The rise has, however, been rocky. After his debut two losses followed. The former Bellator lightweight champion showcased some great skill on Saturday nonetheless, KO’ing Ferguson in in spectacular fashion. A clean front-kick in the second round sent Ferguson to sleep. Dana White says Ferguson is still a force to be reckoned with, but following four losses (admittedly against superb competitors), his UFC days may be numbered.

Canelo Alvarez is one of the all-time greats in boxing. There is no doubt about that. Some speak of him as the current GOAT. As one of the greats, he rightly chases new challenges. Going up in weight to face 8Super) light heavyweight WBA champion Dmitry Bivol is one such challenge, which, in the end, proved too hard. Bivol threw fast jabs, using his speed, power, and discipline to his advantage. Alvarez was visibly irritated, at one point lifting Bivol off the ground after the bell. Bivol won by unanimous decision, all judges scoring the fight 115-113. Alvarez will continue to push the limits and face challenges, with two possible future fights being spoken off. A trilogy fight against Golovkin – a fight which seems to be put on the back burner until he rematches Bivol – and Usyk. Based on his performance against Bivol, Usyk would seem too big and powerful. Weight classes exist for a reason. Yet, Alvarez is considered amongst the greats for his continuous improvements. In the end David did beat Goliath. The question remains whether Alvarez is a David.

We wrote a piece in the lead to PFL 3 on Friday night which saw Kayla Harrison face Marina Mokhnatkina. Harrison took the win by unanimous decision, and Anthony Pettis defeated Irishman Myles Price via (mounted triangle) submission in round 1. Swedish Sadibou Sy won by unanimous decision in the rematch against Russian Nikolay Aleksakhin. I spoke to Sadibou who said “it feels good to win and begin the season with 3 important points!” Asking how he felt about the fight itself, Sadibou explained: “The match didn’t really go as I had hoped, and I wasn’t entirely happy with my effort because I know I can do more and better. But the important thing was to go out there for 15 minutes and get the hand raised at the end of the match! It feels good.” Sadibou will be interesting to follow throughout the season.

The match didn’t really go as I had hoped, and I wasn’t entirely happy with my effort because I know I can do more and better. But the important thing was to go out there for 15 minutes and get the hand raised at the end of the match! It feels good.” – Sadibou Sy

The 7th-8th of May also brought the Sarajevo Senior European Cup in judo. Involving 27 countries, 237 competitors (150 men, 87 women), the judo world tour continues. Hungary brought home 3 gold medals, one silver, and one bronze, thus topping the medal rankings, followed by Belgium and Bosnia and Herzegovina. Sweden ranked at place 21 with one participant (Leonidas Hytonen) coming in place 7 in the men’s -90kg division.  The next European Senior Judo championships will be held in Croatia 14-15th of May with 174 athletes, while the IJF world tour has its next stop in Tbilisi for a Grand Slam June 3-5th with 148 athletes.