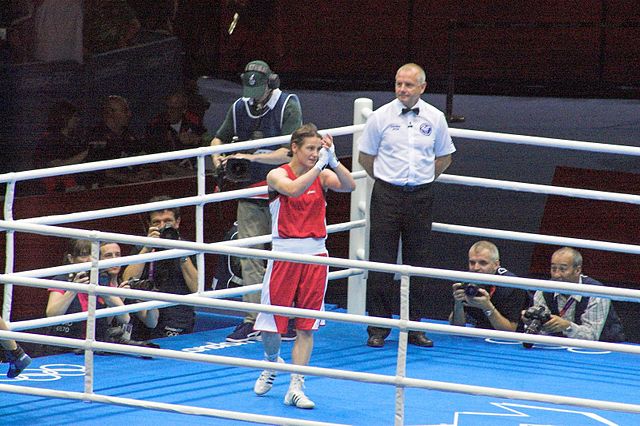 Women’s boxing has had some thrilling matchups of late. The latest in a row of bouts was Saturday’s World Lightweight Championship between Irish Katie Taylor and Puerto Rican southpaw Amanda Serrano. The fight was settled by split decision, with two judges scoring 97-93 and 96-93 respectively in favour of Taylor, while one judge scored it 96-94 in favour of Serrano. From what I saw, Serrano came out with more speed and aggression, outpacing Taylor. Taylor is a champion of the highest standard and showed a champions heart. With that said, Serrano landed more punches than Taylor and out punched Taylor by 30 punches in round 5. Statistics aren’t everything, but Serrano was certainly no easy match for Taylor. Calling it a robbery is going too far, but it is easy to see that this instant classic was decided by a split, rather than a unanimous, decision. Perhaps Mikaela Meyer awaits Taylor next?

Mexican Oscar Valdez entered the super-featherweight world title unification bout against American WBO champion Shakur Stevenson with an untarnished record. The fight went all twelve rounds but was settled by UD in favour of Stevenson. Stevenson outlander Valdez 189-110 in total punches and landed 53% of his power punches. It was a no brainer that the decision should go to Stevenson, who was later seen celebrating with Floyd “Money” Mayweather and Terence Crawford. With a sixth round knockdown and the conniving lead in total punches safely gave Stevenson the win.

Marlon “Chito” Vera returned to the octagon after his win against fellow UFC bantamweight Frankie Edgar in November last year. On Saturday he defeated Rob Font by UD in a catchweight (62.8kg) bout which was also the main event of the night. Chito now seeks to avenge his loss against UFC veteran and former champion Jose Aldo, to whom he lost in December 2020.

Co-main event featured heavyweights Andrei Arlovski and Jake Collier. The decision was split in favour of Arlovski who now has a four-win-streak. He lost against Tom Aspinall who has become one of the top heavyweight contenders. If Arlovski carries on like this he too may join the top ranks, but he is yet to face another top name. In 2019 he lost against Rozenstruik, so his record isn’t pristine. His fights are always entertaining however, so we shouldn’t count him out just yet.

Gerald Meerschaert faced Krzysztof Jotko, and hoped to secure another win to add to his recent three-win-streak, following his brutal defeat against Khamzat Chimaev. Jotko would not allow this to happen, defeating Meerschaert by unanimous decision, both outstriking and dominating the takedowns.

The grandson of perhaps the greatest to ever do it – Muhammad Ali – entered the ring to chants of “Ali, Ali” on Saturday. The middleweight competed in the undercard to Stevenson vs Valdez, facing Alejandro Ibarra in his fifth professional boxing match. He now stands 5-0 with a first round knockout win against Ibarra, who held a record of 7-1. After the fight, Nico Ali Walsh stated “I am bringing my grandpa back to life.” He has a huge legacy to live up to, and carries a big name in boxing which comes with a lot of expectation. So far he is living up to it, but perhaps he should be cautious of any hubris or he risks to fall and tarnish the greatest’s name.