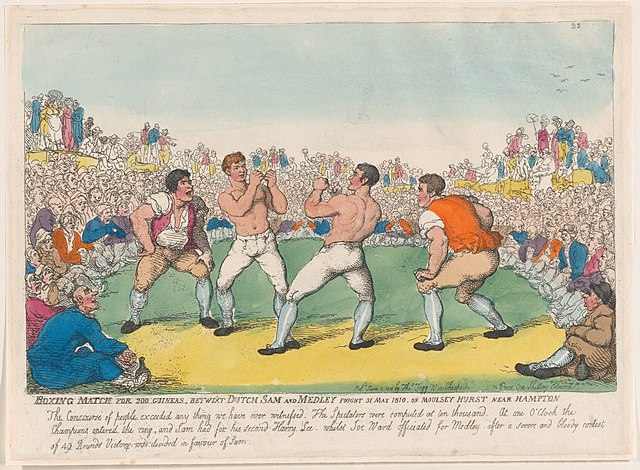 In the 18th- and 19th- century a form of unarmed, bare-knuckled combat developed in rural parts of America. Known as “Rough and Tumble” or “Gouging” it was a no-holds barred combat, known for its brutality. This is the story of one of the predecessors of vale tudo and the UFC.

On the 3rd of September 1774, a tutor to a wealthy and aristocratic family in Virginia noted in his diary that he had come across men who fought for what he supposed was ‘trifling and ridiculous’ reasons. In these battles, it seemed to him, ‘every diabolical stratagem for mastery is allowed and practiced.’ What Philip Vickers Fithian had come across is what became known as ‘Rough and Tumble’ or ‘gouging.’

These names came to replace the name of ‘boxing’ as the fights resembles duels more than gentlemanly sports. Spectators were allowed to say if they wanted the combatants to fight according to Broughton Rules – that is, fair and square – or ‘rough-and-tumble,’ meaning dirty. These were no holds barred fights, with the only rule being weapons were illegal. Other than that, gouging of eyes (from where the name comes), and any other disfigurement of the opponent was deemed acceptable and desirable. The eye-gouging was the apotheosis, the highest achievement in such battles. This form of fighting developed throughout the 19th century especially, with its beginnings in the 18th century, and spread to Carolina, Kentucky, Tennessee, Mississippi, Alabama, and Georgia.

‘Piety, hard work, and steady habits had their adherents, but in this society aggressive self-assertion and manly pride were the real marks of status.’

The new pugilism covered all social classes, although it mainly featured men of the lower classes fighting each other. However, one US senator, James Jackson, ended up in a gouging match when a formal duel was stopped. It had a sense of duelling, in which disputes were settled in gruesome fashion. Nails would be grown large in order to do damage to opponents. Hence, it cannot only have been to settle disagreements, unless the men at the time walked around expecting their honour to be damaged. The fights seem to have developed into spectacle from their duelling roots. The reason, argues Elliot J. Gorn in his 1985 essay, ”Gouge and Bite, Pull Hair and Scratch”: The Social Significance of Fighting in the Southern Backcountry is that ‘piety, hard work, and steady habits had their adherents, but in this society aggressive self-assertion and manly pride were the real marks of status.’ These were hard social times, and with them tough recreational activities seem to have followed suit.

These events were outside the law. Hence, sources are often scarce from combatants who survived the ordeals, but tourists who penetrated the American backcountry have left us accounts of the fights. Sources reveal that the Americans enjoyed the reputation of backwood depravity an gruesome habits. Contrasting themselves to their former English overlords, they enjoyed the legacy of barbarism, courage, and fearlessness.

The story of American rough-and-tumble shows us that fighting has always been part of social and cultural life. It played a part in the shaping of a local characteristic, and the stories often outlived the combatants and likely exceeded the actual events in the detailed accounts which were left behind. It also proves the need to settle disputes, and the urge to fight that has always existed. Even in backwood America, there was an agreement to enter contests: even if it was a no hotels barred fight, combatants were told so initially and from what we can gather they consensually entered these fights. This might, of course, not always have been the case, social pressure or damaged honour inducing men to make brash and silly decisions. Yet, in its own cultural and historic setting, this form of fighting was both entertaining to many and a way to settle disputes. The question as to why this fascination exists in the first place and why we feel the need to settle disagreements physically is a question that continues to beguile us, and one which we invite the readers to ponder.