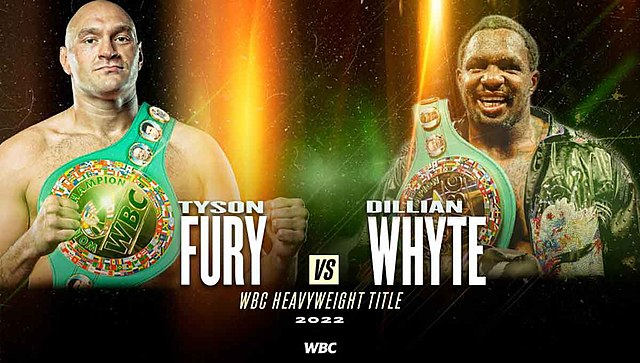 An epic showdown between two of Britain’s best athletes took place on St George’s Day, and ended with no real surprises. Our editor watched the fight from London and analyses the bout. Results disclosed.

It promised to be an exciting fight. It started slow. Both fighters feeling each other out, getting a sense of distance, with Whyte throwing well-timed jabs. The pressure was on Fury to deliver, who entered in exuberant fashion draped in St George’s cross and clad with gloves with the same English flag. Whyte came out southpaw in the first round with Fury in orthodox. Fury connected with a good 1-2 towards the end of the round giving him the upper hand. In the second round Whyte stepped out orthodox and Fury southpaw. By mig-round both fighters stood in orthodox, with Fury landing another 1-2. The third round saw Fury outpacing Whyte and finishing the round with an uppercut. By the first three rounds Fury leads comfortably byt Whyte is still very much in the fight.

Coming in to the fourth round Whyte has gathered spirit and leans into Fury against the ropes. Referee Lyson has to get involved to separate the two giants and gives them a warning. Again, with about half a minute to go, Lyson has to separate the boxers who are wrestling in a corner and lectures them again. Both Fury and Whyte land hooks. Round five opens with a quadruple jab from Fury, while Whyte aims at the body, landing several punches. Fury sticks to the jab. The sixth round is comfortable for Fury who controls the ring and walks Whyte down. Fury lived up to expectations, shutting Whyte down in stunning style with an uppercut KO in the 6th round.

Fury was expected to win and the KO, although not surprising, came with impressive precision. Respect was shown by the athletes on what was a culturally important day for British boxing. As we have pointed out on this site before, there are interesting days for British boxing ahead. What happens to Fury next will be interesting to follow. He has threatened to retire, but UFC heavyweight champion Francis Ngannou has challenged the Gypsy King to find out who the baddest man on the planet it. It would be an interesting matchup for PR purposes, but as a professional boxing match I reckon Fury wins ten times out of ten.

The undercard was slightly underwhelming in its lineup. But the events themselves showcased some good boxing. Tommy Fury faced Daniel Bocianski and outpaced him, winning by unanimous decision. Two fights ended in TKO, David Adeleye defeating Chris Healey in round 4 and featherweight Nick Ball defeating Isaac Lowe in round 6. Welterweight bout between Ekow Essuman vs. Darren Tetley was settled by unanimous decision, Essuman taking home the win.