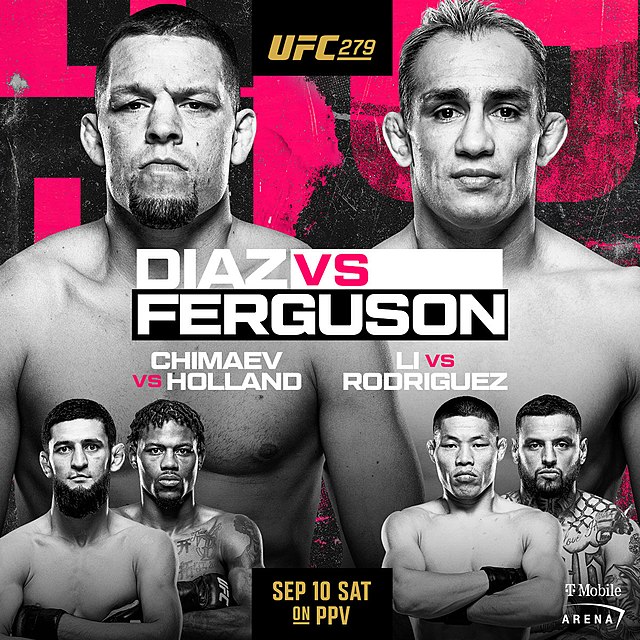 The eventful lead-up to UFC 279 has taken another turn, reshuffling the entire main card. Sparked by Khamzat Chimaev missing weight, speculations as to whether the event would go on as planned were rife, but the UFC confirmed they have updated the card. Here’s the latest.

Just when you think things can’t get much messier you’re surprised by a fighter missing weight and changing an entire card. Khamzat came well over the 170lbs limit weighing in at 178.5lbs. A pound or so is not unusual, but 8.5lbs is pretty shocking. Rumours started spreading and fingers were being pointed in every direction. We now know from Dana that Khamzat had been told to stop the cut by a doctor as the cut had gone bad. This is for the safety of the fighters, but it is nevertheless disappointing to see the main card not going ahead as planned, although the new match-ups are perhaps even more exciting than before.

Diaz takes on Ferguson at 170, where odds favour Ferguson. He’s a tricky fighter, almost jokeresque with his own eccentric style. The odds favour him, but Diaz has come to fight. I’m going against the odds and picking Diaz. They are two veterans in the game who have never fought. As mentioned before, this is Diaz’s last fight on his contract and people thought the UFC wanted to send him away with a loss. This could well turn out to be an upset for the original story-line, but a better ending than we could’ve expected. It would also be a well-deserved ending for a legend of the sport, fighting against another legend who is currently on a losing streak. Diaz is never afraid to scrap, has tremendous striking, and is good on the ground. Ferguson is more playful in his style, he is a mixed martial artist in the truest sense, but I believe the recent losses have got to his mind. Either way, we’re in for a good one.

Every fight is essentially the same in its fundamental composition. These recent events prove the point: fighters come to fight, although the opponent might change at the last minute.

Khamzat will instead face Kevin Holland whom he has had a beef with all week. Kudos to Holland for stepping up. Khamzat isn’t afraid of anyone he keeps saying, so it will be a fun one as it represents the apotheosis of an escalating rivalry. Surely we will find out who has to eat their words and who is the true “gangster” – a term floated around a lot by fighters. In my piece leading up to the event, I wrote about every fight being essentially the same in its fundamental composition. These recent events prove the point: fighters have come to fight, although the opponent might change at the last minute. On an athletic level it is interesting to ask how it affects game strategy, how do they asses strengths/weaknesses at such short notice. In the end, however, these fighters all say they will take on anyone anytime and this event has proven that to be the case. Let us see if it delivers on being a real dog fight. I think Khamzat wins.

Meanwhile, poor Li (or “Leech”) who had bought a new suit and sharpened up his English in time for the press-conference was left without the opportunity to show off his newly acquired wardrobe and vocabulary, but he faces Daniel Rodriguez who was set to face Holland. Rodriquez has the odds favouring him, but it’s fairly evenly matched. He has weight, reach, and height to his advantage, but Leech has won the hearts of many fans in the lead-up to the fight. I think Rodriguez wins but many of us will surely be cheering for Leech. His stock has risen, while Khamzat’s has taken a dip, being booed after the weigh-ins. He can rise again with a win.