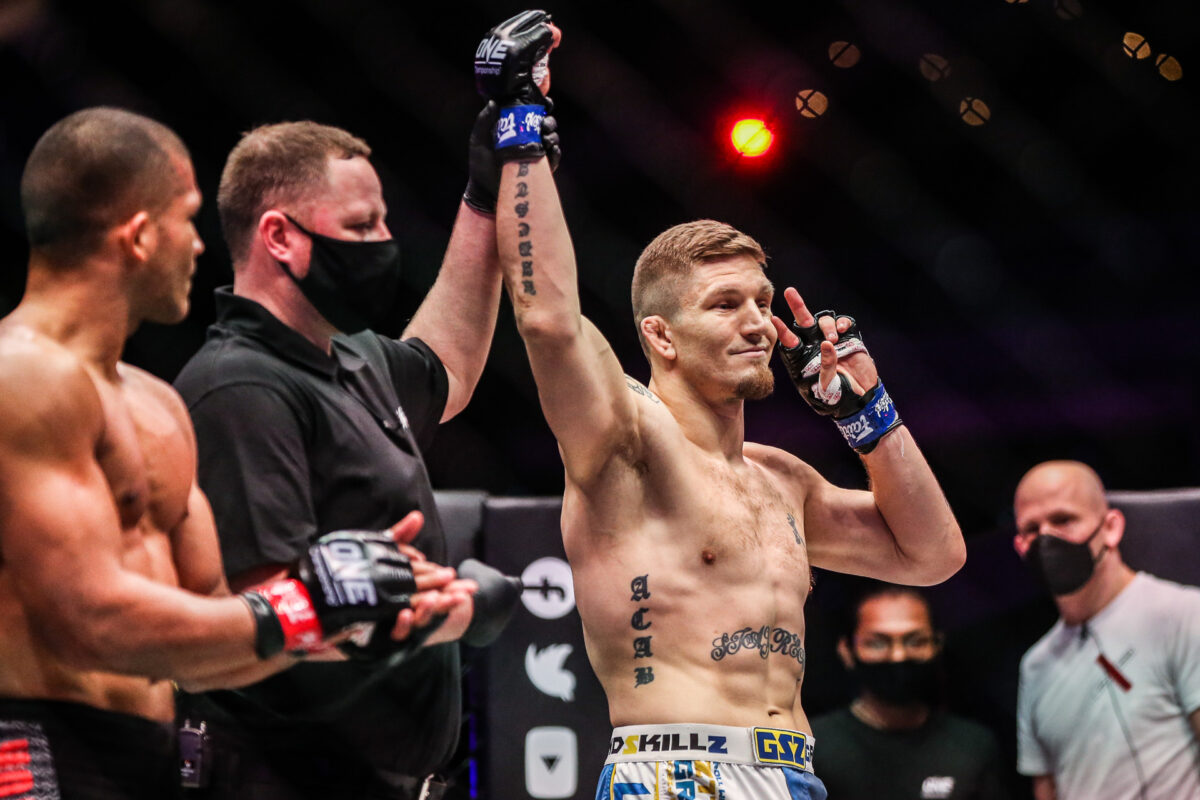 The former ONE Welterweight Champion, Zebaztian ”The Bandit” Kadestam from Sweden, returns to the Circle facing Iuris Lapicus at ONE 160 on Friday, August 26th. We spoke to him for an exclusive interview, covering his career, his hopes to regain his title, and his love for ONE Championship.

Zebaztian Kadestam, known as “The Bandit”, started martial arts at an early age after trying many sports. Around the age of 13, he was hooked on Muay Thai. Kadestam also found himself obsessed with the Rocky films, seeing the story of the famed boxer as a route he too could take. The initial contact with the sport coupled with an epic success story meant he believed he could truly succeed in doing something he loves. On top of this, he has always enjoyed exercise, so the arduous lifestyle has always been a part of his own story.

We are driven by entertainment. We carry this wish to see bloody fights because of the primitive instincts we all have. Looking at the timeline of history, we have only been civilised for a very short time.

The reasons for choosing martial arts may be even more profound. We spoke about what motivates people to choose to fight, as opposed to any other sport. “I think, for my own part, that I can go back to something very primitive. A connection to the cavemen or something like that” responds Kadestam while letting out a laugh. “The animal instinct still exists. That feeling of enjoying the struggle. It’s also very naked and raw. A loss in front of millions of people is not like having a bad day at work. It’s a very honest sport in that way.” The instinct goes for watching martial arts and combat sports in general, he adds. “We are driven by entertainment. We carry this wish to see bloody fights because of the primitive instincts we all have. Looking at the timeline of history, we have only been civilised for a very short time.”

The cultural historian Kenneth Clark, speaking of the Vikings, said that although they had culture, they cannot be said to have had civilisation. Could it be that Swedes are less civilised, and this speaks to the great success in martial arts? Or are there other factors? “It’s quite surprising! Given our sporting culture, it is surprising how well we do in international competitions. Looking at other countries there are better opportunities to succeed. I’m glad we’ve done so well and we’ve learned a lot and perhaps amassed more information on how to succeed in sports in general. I am a bit jealous of athletes in other countries who have had better conditions starting off, but that doesn’t help me now! We have a martial arts culture that is growing and the future will be much brighter.”

We turned to the many successful gyms and management teams in Sweden that have been in charge of the decorated athletes. “AllStars started when there were many small clubs, and they all focused on particular styles. AllStars was more like a holistic gym. But the biggest pillar in Swedish MMA is Omar Bouiche. Even the people at AllStars have trained with Omar at some point. He cannot be forgotten when speaking about the foundations of MMA in Sweden. At Pancrase, we have each other and have made it to the largest promotions and have had great success. Sadibou Sy in the PFL, Oliver Enkamp in Bellator, and myself in ONE. If you want a large team you need the professional side in place as well.”

Looking forward to Kadestam’s next fight, he says he is focusing on himself. Sticking to the essentials, working on what he knows best. “Except when I face the Russians I focus on my own strengths! It’s different when you face specialists. Then you have to adjust. Now it feels like a great match-up: tough chap, many finishes, and well-rounded. After 30-40 seconds I’ll see what he’s up to and when you’re faced with a situation like that it’s better to be sure about your own skills instead of expecting something.”

Walking around here in Sweden, people ask ‘do you fight in the UFC?’ But MMA is bigger than any one organisation. I love the organisation [ONE Championship], and especially that they have Muay Thai, Kickboxing, grappling, and even boxing.

Many people still associate MMA with the UFC. Sometimes it can seem as if the two are synonymous. I ask him what it’s like to fight for an Asian-based promotion. “I love it. I think it suits me very well. I’ve lived in Asia for many years and began my career there. For me, it’s a very natural place to be. I’m just sad it’s not mainstream. We [ONE] have as many viewers as the UFC, but they’re based on the other side of the planet. Walking around here in Sweden, people ask ‘do you fight in the UFC?’ But MMA is bigger than any one organisation. I love the organisation, and especially that they have Muay Thai, Kickboxing, grappling, and even boxing. It welcomes many more viewers. MMA fans are very particular – but so are Muay Thai fans! In their own way. Each martial art has its own fans, and by combining styles at one event there is potential to reach so many different people. I really like that.”

Kadestam has his eyes set on one thing: the championship belt. He takes each fight one at a time, but the goal is clear. He wants to reclaim his title. “I like ONE, I like the organisation, and if Asia opens up a bit after COVID, I would love to stay there. I still have a few fights left on my contract. If it remains closed, I might look elsewhere to have more fights, but for now, I have a fight next month. I have to go in and perform. With a good win, I am one step closer to the title again.”

With the target set, I ask him how he stays motivated in order to accomplish his goal. “It’s difficult at times. On the days I lack motivation I see it as my job. I go to the gym and do what I must. That’s how it is and how it’s been for the last 10 years. I am fortunate to have a job I love to do. So most days the love is there and the motivation flows from it. I enjoy what I do.”

Sweden stands behind Kadestam as he fights his way back to the top of ONE Championship, aiming to bring back the title to his home country.