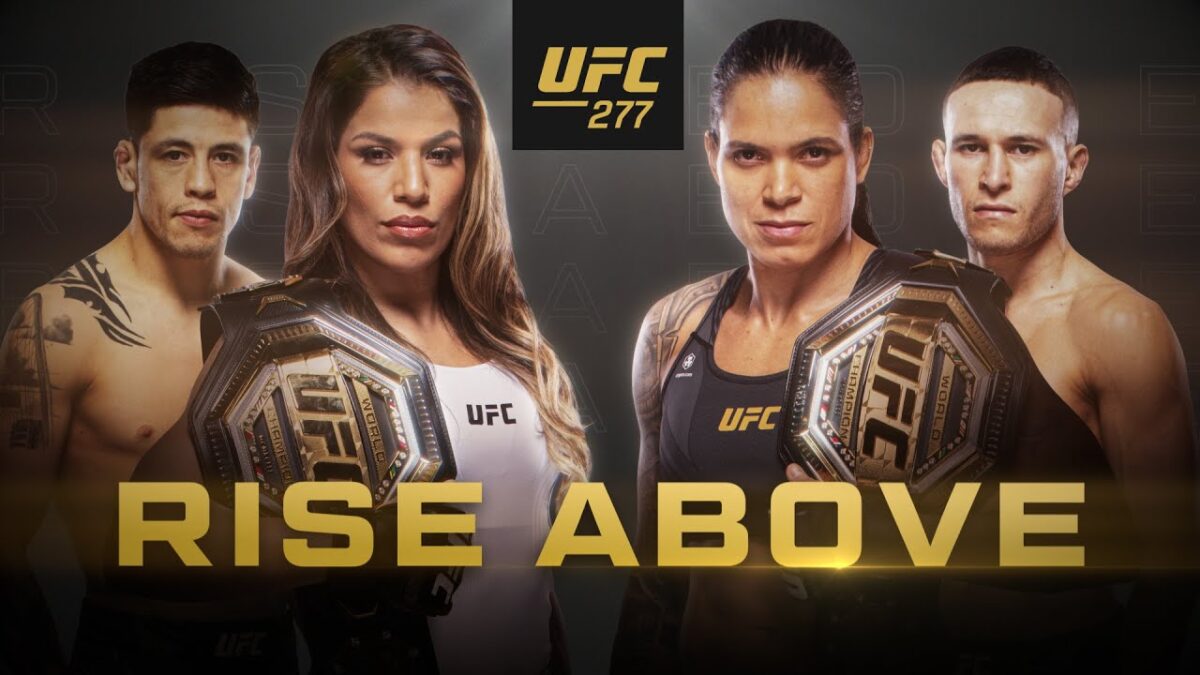 With two belts on the line and a heavyweight match-up for the ages, UFC 277 is an event fans will not want to miss. Add to this that one of the title bouts is the greatly anticipated rematch between Amanda Nunes and Julianna Pena.

Many people thought she was indestructible. For many years she seemed indestructible. Facing top athletes such as Valentina Shevchenko, Ronda Rousey, Holly Holm, and Cris Cyborg. But Amanda “The Lioness” Nunes refused to be stopped. This changed late last year when she faced Julianna Pena. Just after the half-mark of the second round, Julianna swung her arm around Nunes’s neck and submitted the champ in a rear-naked choke. With that, the biggest upset in UFC history may well have taken place.

Nunes vows to reclaim her throne, which, if we are to believe anyone, she very well could. Yet, in front of her stands a well-rounded mixed martial artist who has an 11-4 professional record. Looking at MMA purely mathematically it would have been safe to bet on Nunes in their last face-off. With a 2-2 record in her last 4 fights, Pena was far from an expected challenger. The game can change at any moment and a loss such as the one end delivered to Nunes can shake the confidence of a dominant athlete. We have seen this repeatedly: Masvidal, Till, Gustafsson. A loss can change things, particularly when it comes through submission or TKO. It will for sure be an exciting bout and Nunes will bring all the fire to the octagon – be ready for that. The odds are currently with Nunes. I’d like to think we’ll see another upset and with that a good upswing in the bank balance.

Before the female bantamweights make the walk, Brandon Moreno will face Kai Kara-France in a Flyweight Interim Title bout. After the thing and froing with Figueiredo, Moreno moves on to new challenges, while that potential fourth bout lingers in the background. Moreno has a win over Kara-France and is favoured to win tonight as well. The Mexican “Baby Assassin” has been training MMA since the age of 12 and has both a height and reach advantage over Kara-France. Kara-France is no walk-over in the Flyweight division, though, as he has a fairly good TKO/KO record of 46%. Moreno should be able to slip the heaviest shots and take the win. I think he wins it before it goes to a decision.

The always entertaining Derrick Lewis steps back into the action facing Sergei Pavlovich The Russian has an impressive record of 15-1, with a loss only to Overeem in 2018. He fought in UFC London earlier this year (March) and before that he took a break from 2019, although he tried to arrange fights which were all cancelled for various reasons. Now the two heavyweights go toe-to-toe, with Derrick coming in after a loss. They both hold an average of about 80& KO/TKO wins, so these fighters pack heavy punches coupled with precision. Pavlovich has the upper hand when it comes to strikes per minute which are significantly to his advantage as well as his reach. The Russian walks home with the victory according to bookies. I’d go with them on this one.

The Flyweight division has been all about Moreno and Figueiredo for so long that you might have missed that there are more athletes on the roster. Alexandre Pantoja and Alex Perez are here to show you why the division matters, in a very even match-up statistically and stylistically. Pantoja is the favourite here, but word on the street is it will go to decision. A clear favourite on the card, however, is Magomed Ankalaev who meets Anthony Smith at centre cage. Smith has come out saying people speak of Ankalaev as a second messiah, but he thinks he can deliver the upset. Ankalaev has one loss – to Paul Craig and his famed triangle choke – but other than that he sports a flawless record, defeating the two recent UFC London victors in his division: Nikita Krylov and Volkan Oezdemir. If Smith beats Ankalaev it would be the biggest upset of the evening.

The prelims will see some fun names back in action. Drakkar Klose who recently defeated Brandon Jenkins in the Lightweight division takes on Rafa Garcia. A personal favourite is Drew Dober who meets Rafael Alves. He has slowly worked his way up from the early prelims to prelims, faced and beat some once promising names such as Alexander Hernandez, but always fallen short of the big ones: Dariush, Riddell, and Makhachev. Makhachev now faces Oliveira for the title and I think Dober put in a fair shift against Makhachev, so his career is well worth following even if he doesn’t make it past the prelims. With a win tonight, he might just about cross the line over to the main card. He is also the favourite in the fight.