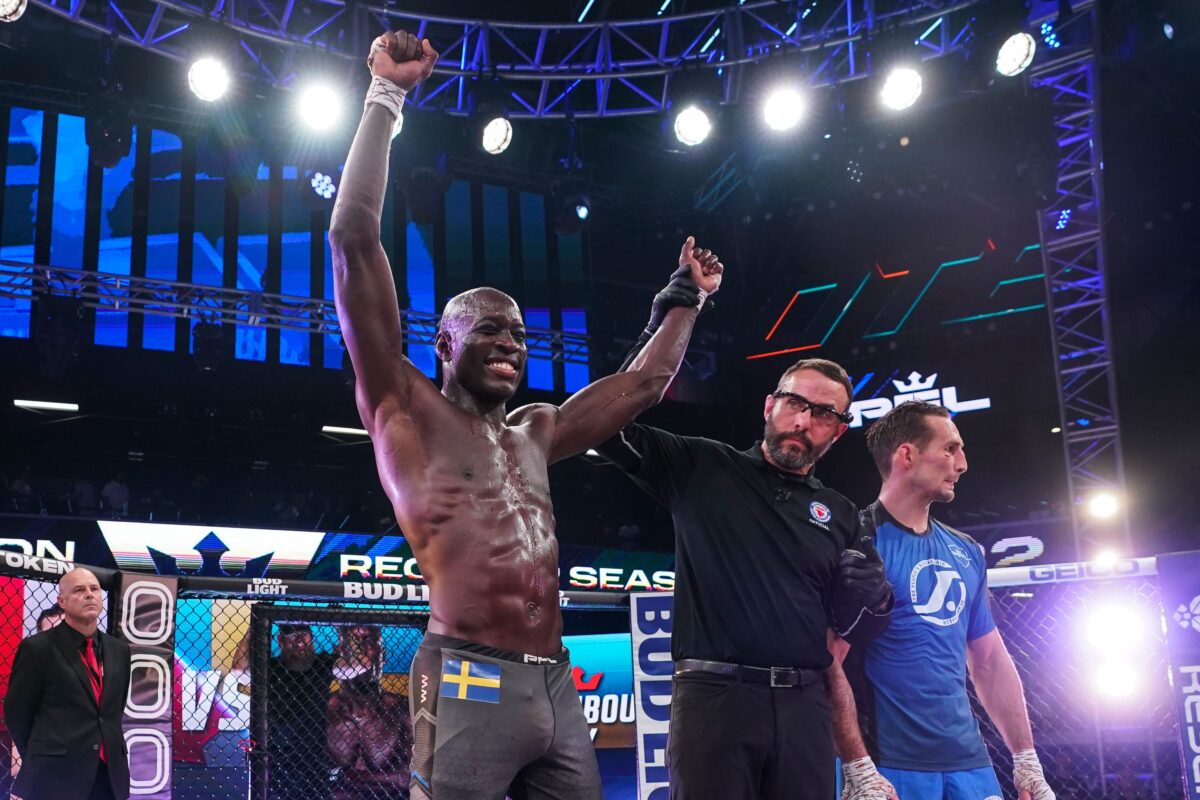 Tomorrow, August 13th, the 2022 PFL Playoffs continue with Welterweight and Heavyweight showdowns in Cardiff, Wales. Amongst the contenders battling for a spot in the finals is the Swedish Welterweight Sadibou Sy. We spoke to him ahead of his semifinal bout.

With a flawless record in the regular season, Swedish Sadibou Sy ranked third in the season standings with 6 points and a 2-0 record. Tomorrow he faces Carlos Leal, a well-rounded fighter who ranked third in the standings. The fight takes place in Motorpoint Arena in Cardiff, Wales, from where we spoke to Sadibou about his preparations ahead of the bout.

For Sadi, the training camp has been conventional. No changes, no special preparations. “Every fight is equally important to me. I cannot go into a fight and think ‘this isn’t as important as the next or the past one. I put too much time into it. Every fight is the most important, whether it is ‘win and go home’ or just a regular fight. The circumstances don’t matter.” Yet, what is normal to a professional athlete like Sadi is far from normal for most of us. Since January, Sadibou has been in Las Vegas training for his past few PFL fights. It’s been intense. Six days of training, two-three sessions per day.

Amidst such intense training, how does he keep motivated? Is it the title, money, or legacy he envisions when he walks to the gym on a rainy day? It varies, he says. “You take inspiration from different places but in the end, it’s about being dedicated. I have a goal and my goal has not been reached until I win the season. That is one of my goals. Another goal is to keep winning, next year and the year after that. To get there takes incredible dedication, I know that. Some days one won’t want to go to the gym. But you do it anyway. It requires extreme sacrifices, but the price is worth it.”

I’m in perfect shape – physically, mentally, spiritually, and emotionally. Everything is at its peak. So for me, I believe I will have my hand raised on Saturday.

Looking at Leal specifically, Sadi sees a talented athlete and a tough opponent. But his preparation has convinced him he is ready for any challenge. He had sparring partners who could imitate Leal’s style. “He walks forward. He is strong on all fronts. He can stand and punch, he can wrestle. He can grapple. Well-rounded! I believe I have all the necessary tools to win and my preparation has been incredibly good. I’m in perfect shape – physically, mentally, spiritually, and emotionally. Everything is at its peak. So for me, I believe I will have my hand raised on Saturday.”

The road to this seminal point in his career has been slightly coincidental. The young Sadi was more interested in football, but when he was in-between clubs, looking to transfer to a new club, he tried a martial arts class. Around 2002, he entered a kickboxing/Muay Thai gym and instantly fell in love with the sport. Since then, the success has been unquestionable. In general, Swedes are doing extremely well in the various martial arts promotions around the world. Sadi is our top man in the PFL. Why does he think Sweden had had such success? “Well, we’re a small country! And compared to the number of practitioners of MMA in Sweden compared to other larger countries, we produce great fighters. I think it has to do with the great trainers we have. They are experienced and have a lot of knowledge which allows us who compete to have very high-quality training. ‘Training with the best to become the best’ is a classic saying, and even though we are fewer we have high quality. It helps a lot.”

As the best Swede in the PFL at the moment, I ask how he views the rather unique promotional style of the PFL with a regular season and playoffs. “I’ve been with them for a couple of years now. I am very happy with them as they are very fighter friendly. They take care of us fighters and our needs. They are very ambitious: they began on a high level and have worked to keep it up. According to me, they are bigger than people thought would be possible. Many thought it wouldn’t last, but it has. I am very happy to work with them. It’s definitively my home.”

Sweden wishes Sadibou “The Swedish Denzel Washington” Sy all the best as he chases PFL gold and the prize money! Bring it home.