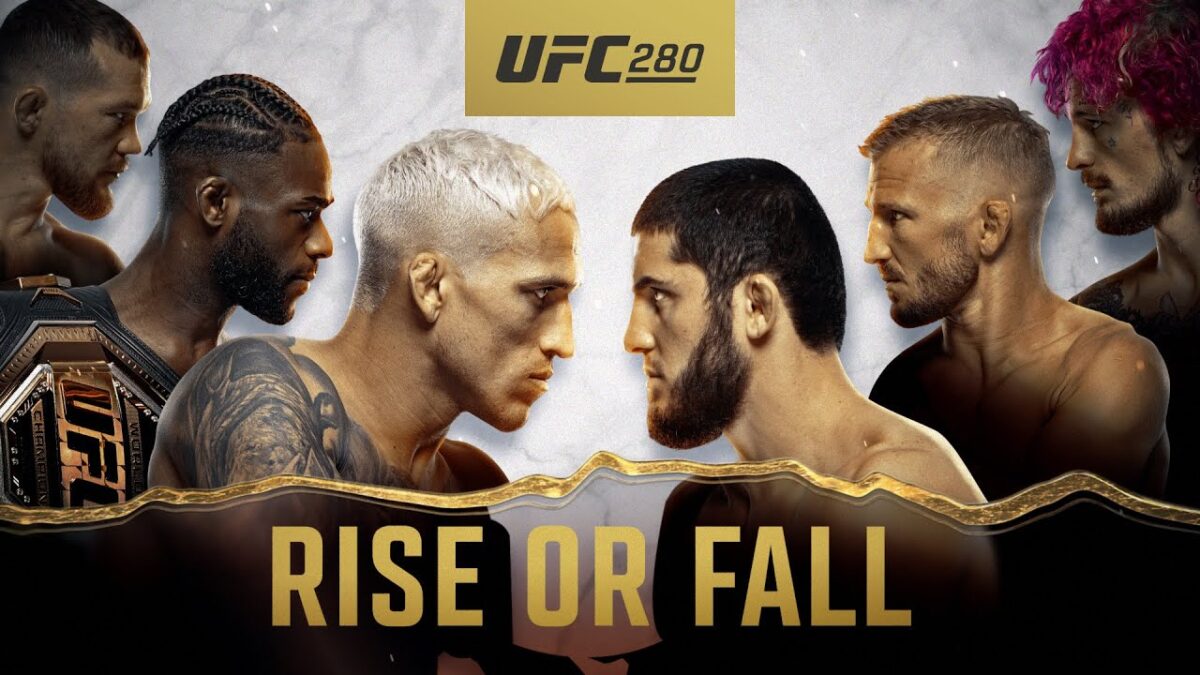 Some fans speak of tomorrow’s UFC 280 event as one of the most stacked cards to date. That might very well be true, given the extraordinarily exciting match-up of styles and personalities on the card. Here’s what you need to know.

Fights fans have a superb event ahead, headlined by what I believe to be a perfect match-up on paper. The story of Charles Oliveira’s rise to the championship is remarkable. He had a series of losses in his early days with the UFC and the record was unimpressive. He rectified his mistakes and has been undefeated since 2018. The Brazilian hailing from the country’s infamous favelas comes from a rough and poor background. Not being able to pay for his early BJJ training, his coach offered him lessons for free. He suffered from rheumatic fever and heart murmur as a child, but after overcoming poverty and health issues, he soon became a force to be reckoned with in MMA. In 2007, he stacked up a record of 12-0. A legendary grappler, many expect him to utilise his superior ground game this weekend, but he faces another phenomenal grappler in Islam Makhachev.

This is no doubt the biggest fight on the card. Oliveira vs. Makhachev. Two fantastic grapplers. One is a jiu-jiteiro, the other a wrestler. Makhachev, with a record of 22-1, is called Khabib 2.0. Whether he deserves such a title will be seen tomorrow night, but the fight could not be scored more evenly in the lead-up. Oliveira is sometimes counted out because fans think Makhachev is a steam train coming to bulldoze through the Brazilian. Oliveira, however, is a tactical and technical master, so any such statements are wildly exaggerated. The bookmakers have the two fighters fairly even, with Makhachev ahead slightly. I think Oliveira might have the tools to submit Makhachev, but on the other hand, the rough and poor favela boys are in deep water when they meet the much poorer and rougher kids from Dagestan. Both men will be ready to give it all in the octagon, and fans are in for a treat.

To be entirely honest, I’d forgotten about Dillashaw after his disappearance following his doping scandal. Nobody wants to back a cheater, but Dillashaw owns his mistakes – perhaps a bit too much exclaiming that Sterling will be beaten by “a cheater” – and he is an entertaining fighter. Sterling defeated Petr Yan twice by decision and could have fought Cejudo. Dillashaw is, however, a former champion and a big personality in the sport. It could be an exciting fight, but of all the fights that have hype around them, this is the most likely to underwhelm. Sterling is ahead in the odds, and I place my predictions in his favour too.

Yan recently lost against Sterling and now they fight on the same card. Depending on how things go tomorrow, it is likely that the two fight again. They both have big challenges in front of them, but they are both the favourites. Yan is shorter and bulkier than O’Malley who is tall and lean for his division. He has a reach advantage, but Yan is a veteran with a superb record and accurate striking. Yan has to close the distance, aim for the body, or wrestle with the taller opponent, while O’Malley can utilise his range advantage with well-placed kicks. It’s an interesting fight, and O’Malley has created a lot of hype around himself. He has failed to live up to it once, and he better make sure he doesn’t do so again lest his delusions of grandeur (and wish to become a new Conor McGregor) are shattered once and for all.

Other fights on the main card are Beneil Dariush vs Mateusz Gamrot and Katlyn Chookagian vs France’s Manon Fiorot. The prior is a fight in a lively and active division where fighters constantly battle to climb up the rungs and place themselves in the rankings. Naturally, that happens in every division, but the Lightweight division is particularly active and exciting. This fight doesn’t excite me as much but Dariush has been around a long time and made his name known. Gamrot is newer to the division and is still looking to make a name for himself. For this reason, it’s a fight to keep an eye on. You never know who will be fighting for top spots in the division a year from now.

Chookagian challenged Valentina Shevchenko in 2020 but went home with a loss. She then defeated the champion’s sister, lost to Jessica Andrade and followed the loss with 4 recent wins. Fiorot is new to the UFC but is hitherto undefeated. Interesting, both fighters started their careers in martial arts through karate, so hopefully, we get to see some karate-style striking tomorrow. Fiorot then went on to Muay Thai however, and Chookagian is an accomplished grappler. Anything can happen, but Fiorot is the favourite. I’m still going with Chookagian.

Belal Muhammed tops the prelims, fighting Sean Brady. Both fighters are ranked, #5 and #8 respectively, in the Welterweight division. Muhammad made some noise calling out Khamzat but as of yet, there has been no fight. Khamzat’s teammate Volkan Oezdemir however takes on Nikita Krylov, who in turn defeated their teammate Alexander Gustafsson in London earlier this year. A Light-heavyweight bout with a lot of heavy hitting is what I’m expecting, Krylov having finished Gustafsson in just a matter of seconds when they fought. Hopefully, Oezdemir can rectify this and avenge his teammate.

The prelims are kicked off with Swedish Lina Länsberg facing Brazilian Karol Rosa. Länsberg is one of the Swedish fighters ranked in the UFC, standing at #12 in the Women’s Bantamweight Division. Rosa is ranked #9, is the favourite and has a reach advantage. Nevertheless, we stand with Swedish Lina. Let’s go, UFC 280!