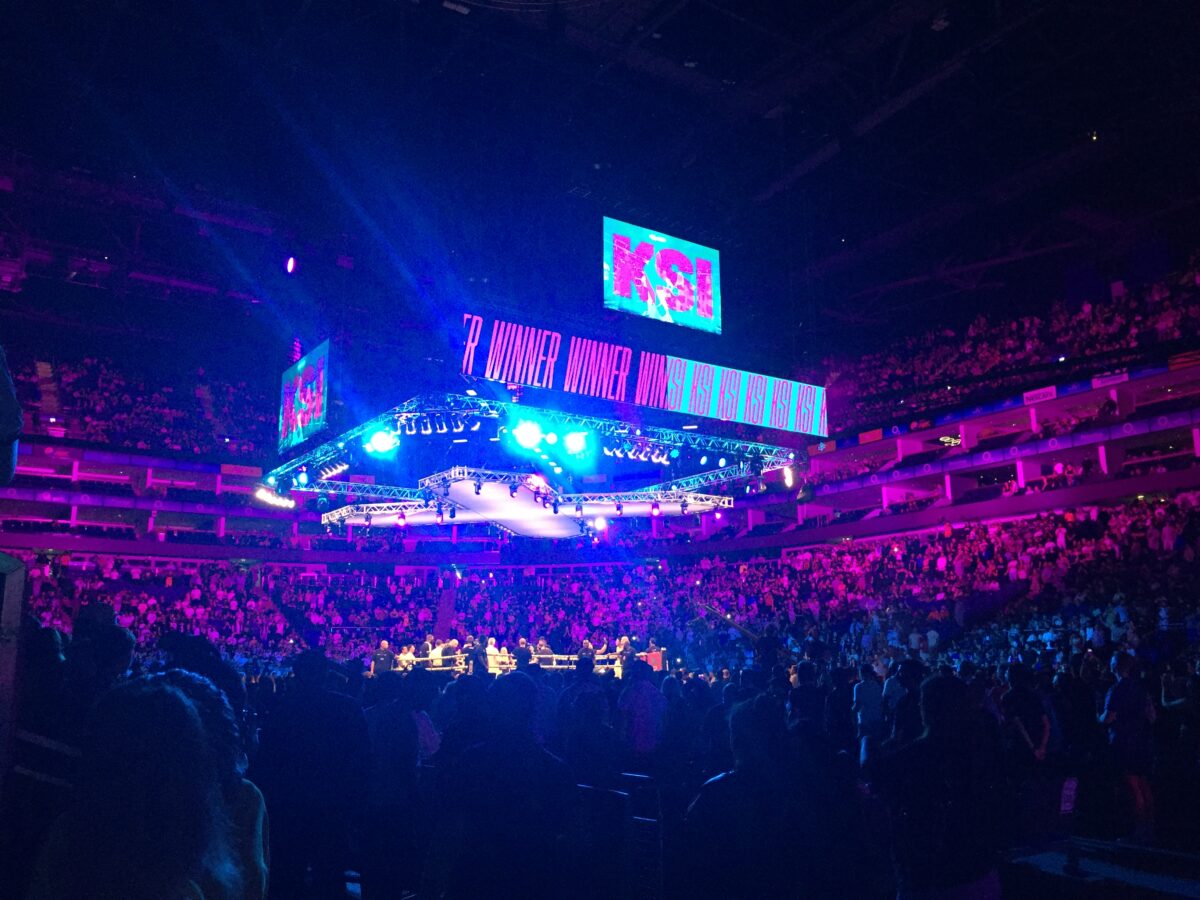 KSI promised to serve up two KOs in one night. He delivered on his promise and provided a spectacular show full of theatrics. Our editor writes from London and continues to ask what the future of boxing holds. Results disclosed.

Only two months ago I attended the UFC London event at the same venue – The O2 Arena in Wembley, London. People rushed to the entrance and blocked passageways. I thought it was a colossal number of people but little did I know it would be outdone just a few weeks later by a dozen YouTubers entering the ring. The queue to the entrance stretched almost all the way back to the tube station, 800 feet or roughly 250 meters away. Waiting for a quick dinner at the nearest Subway I waited 40 minutes for a simple sandwich. The average age can’t have been more than 18 and waiting for my press accreditation one of the security guards told me he has worked hundreds of events, but none of them sells out like this. “It’s mad”, he said, adding, ‘“I don’t know why they bother with this sh*te” – meaning celebrity boxing.

I asked fellow writers what they thought – is it boxing? – no. But nor should we expect it to be, they explained. I agree. It’s a spectacle, and it’s a darned good one from a  marketing perspective.  Most fighters on the card had never fought before, while some of them had fought a handful of times. It showed. Yet, as one of the promoters said at the press conference at the end, credit is due to everyone who stepped into the ring. They displayed heart and courage, they had fun and got a paycheck. People in the stands enjoyed it. What’s the harm? Another, more senior, writer, replied “it’s not what we’re used to” when I asked if he thought what we had witnessed was boxing. Nevertheless, he and I both nodded our heads in agreement with the promoter as he spoke of the pride he takes in the determination the influencers show in the lead-up and in the ring.

The event opened with KSI fighting Swarmz. Don’t ask me who they are exactly or what they have done, because – honestly – I don’t know. Fans were shouting names throughout the night at people I had never seen, and at one point I was sitting next to someone whom I was told was one such famous YouTuber. I’ve forgotten his name, but I did recognise one VIP guest who was escorted in early on in the night: Nigel Farage, leader of UKIP and heavily involved in the Brexit campaign. Later in the evening, Derek Chisora showed up and Chris Eubank JR helped out as a presenter. KSI made pretty quick work of Swarmz and walked off to prepare for his second bout of the evening.

The only one I was impressed by was “Salt Papi” – a Philippino YouTuber who moved his hands rapidly and had half-decent footwork. He won within the first 40 seconds of the first round by KO. After the fight, I met the “Salt Papi’s” actual papi. He looked proud of his son and happy to be there with him. No doubt we will see him fight again. On this card, one fight might qualify as a good 4 rounds of sparring: King Kenny vs FaZe Sensei. Kenny won by majority decision. KSI then returned to fight Pineda who had a professional record of 2-5. It has been claimed that any professional could beat these YouTubers but yesterday showed that is not necessarily the case. Perhaps it showed that some shouldn’t be professional boxers. The jury is out, but Pineda walked away with a loss, continuously complaining about hits to the back of the head. Once or twice might well have been justified, but not throughout the fight. The Mexican was visibly scared, was put on his back a number of times, and flailed around the ring like Cantinflas (Mexican comedian). He was TKO’d before the final bell.

YouTubers have brought thousands of new viewers to boxing. A sold-out O2 on a Saturday night is no bad accomplishment. These influencers have real or feigned conflicts which they use boxing to settle. But the question is: why boxing? They might just as well have fenced, played tennis or ping-pong. Yet they choose boxing. What is it about boxing that makes people take to it to settle conflict? It is worth asking as it can say something about us humans and about the sport itself. The quality of the fights might be questionable, but the phenomenon which is boxing and the business it provides is undoubted. Last night was full of theatrics and attendees got their money’s worth judging by their chants and screams.

So, is this development good or bad? I think it’s fair to say it’s too early to tell. KSI recognised this yesterday saying he needs more fights before he makes the Jake Paul fight happen. It may also be a calculated business move: it’s the biggest fight to make in YouTube boxing, and making it now could damage the entire enterprise. Yet, keep it too long before making it and their stars may have waned. It’s a gamble, but they seem to have understood the business. The sport is new, and as KSI’s promotion (Misfit Boxing) shows, they want to allow for more cross-over boxing. Reading the classic Zen & The Art of Motorcycle Maintenance on the way back after the fights I came across a passage I thought was relevant:

‘What is new?’ is an interesting and broadening eternal question, but one which, if pursued exclusively, results only in a parade of trivia and fashion, the silt of tomorrow. I would like, instead, to be concerned with the question ‘What is best?’, a question which cuts deeply rather than broadly, a question whose answers tend to move the silt downstream.’

Influencers are the new thing. YouTube boxing is fashionable. It probably does sell more than Fury vs Usyk at this point. But is it the best boxing has to offer? Given enough time we will surely know if it is here to stay or if it is indeed a fad, albeit a much-needed fad injecting some new life to an old sport.