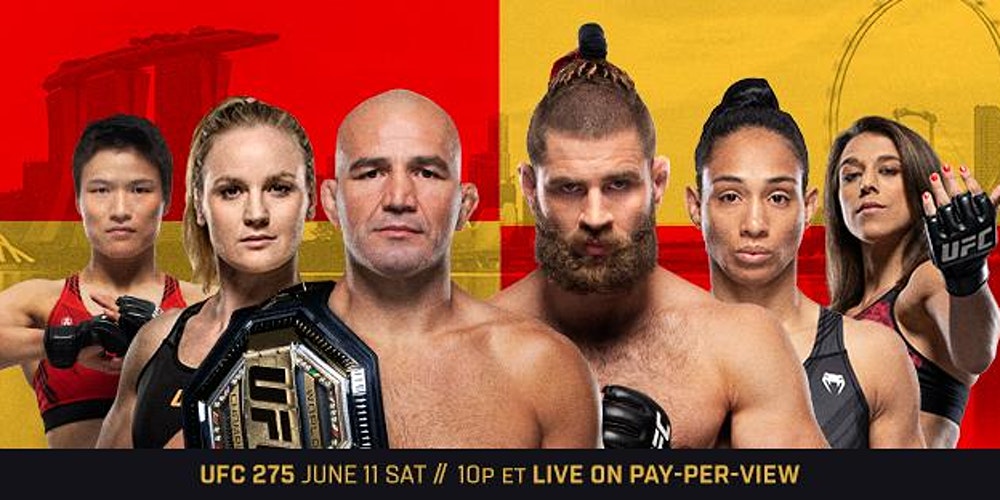 UFC 275 with two titles on the line and several boxing bouts await fight fans around the world this weekend.

Glover Teixeira astounded fans when he claimed the UFC light-heavyweight belt from reigning Jan Blachowic late last year with a rear-naked choke submission win. He is 42 years old, making him the oldest first-time champion in UFC history.  On June 12th he faces Jiri Prochazka, one of the most entertaining fighters in the light-heavyweight division, having knocked out Dominick Reyes with a perfectly executed spinning back elbow.  Teixeira is more experienced and has a background in boxing and BJJ, and has a loss against Alexander Gustafsson. Prochazka is well-versed in Muay Thai and carries a characteristic nak muay (Muay Thai athlete) hairstyle. The odds favour the challenger, and for those looking to place bets, I think it is wise to follow the bookies on this one.

Valentina Shevchenko seems undefeatable. She has only lost to Amanda Nunez in the UFC, both times by decision. June 12th, she faces Taila Santos, a fighter who claims to have identified Shevchenko’s weaknesses. Valentina ”The Bullet” is unfazed, claiming she has heard that before. The odds are with her, her track record speaks volumes, and her well-rounded, fast-paced style means she is highly likely to remain champion by the new week.

One of the best fights in women’s MMA by far came in UFC 248 when Joanna Jedrzejczyk faced Zhang Weili for the women’s strawweight title. Weili retained her title, which she has since lost in a bout against Rose Namajunes (who in turn lost it in an underwhelming performance against Carla Esparza, who was the first to hold the UFC strawweight title. She then lost it to Joana). A complicated history in many ways, which is set up for repetition. The winner of the forthcoming bout is said to face Esparza for the title. Joanna hasn’t fought since her decision loss against Weili, and Weili is coming out of a loss. We spoke to Joanna about her preparations earlier. If it’s anything like the former fight, we can expect fireworks. That is, in fact, exactly how Mike Brown – Joana’s coach – has described it. The odds favour Weili marginally, but I for one think Joana is back with a vengeance. History can truly be about to repeat itself.

More about the event here.

The undefeated Kyoguchi won the title by defeating Hekkie Buddler in December 2018 and last fought in March 2021, beating Axel Aragon Vega. Bermudez is the WBA ’regular’ champion, which he became after stopping Carlos Canizales’ unbeaten record.

Riakporhe (14-0) defeated Deion Jumah in a London derby held at Wembley earleir this year. He now returns to defend his flawless record, facing Italian cruiserweight Fabio Turchi in Wembley. In Turchi (20-1, 14 KOs) Riakporhe faces his second successive southpaw. This could prove a good preparation if the rumoured bout with WBC title holder Ilunga Makubu can be arranged.

Although unbeaten, Bryan is the underdog in his fight with Dubois, who is heralded as a potential heavyweight star of the future. Bryan’s promoter is the legendary Don King, now 90. King won the purse bids to promote the bout, hence he is arranging it in the US. Dubois’ promoter Frank Warren and UK broadcaster BT Sport are claimed to have ensured the bout will take place at a time that allows UK viewers to watch at a reasonable time.

The fight will be live on BT Sport 1 and Frank Warren is hosting a UK-based show with coverage starting at 7pm BST.